Just How Harmful Is TV for Your Health?

Cautions about TV viewing are as old as television itself, but how bad is it really?

A number of studies cite health risks due to the link between a sedentary lifestyle and the number of hours spent watching the tube.

Young adults who watch three or more hours of TV a day and get little exercise have a greater chance of cognitive issues in midlife, according to a 25-year study published in JAMA Psychiatry.

The same amount of TV time could also double the risk of early death compared to watching an hour or less each day, according to research published in the Journal of the American Heart Association.

People who watch TV for five or more hours a day have more than double the risk of dying from a blood clot in the lungs compared to those who watch 2-1/2 hours a day, according to a study in the journal Circulation.

Again, this is likely due to all the sitting involved.

What’s the answer? It’s a two-pronged approach. Cut back to one to two hours of TV and increase the amount of moderate-intensity exercise you do to between 60 and 75 minutes every day. According to research published in The Lancet, this won’t completely eliminate the increased risks associated with TV time, but it can certainly lessen them. It also helps to find more movement-oriented pastimes to replace the other hours of TV viewing.

Remember that the health risks come from day-in, day-out prolonged TV viewing. If you skip it most days during the week, occasionally binge-watching a series shouldn’t be too harmful. Just take 15-minute movement or stretching breaks between episodes and resist the urge to munch on high-calorie treats as you watch.

Do your children watch too much TV, too? The nonprofit GreatSchools.org has tips to help kids cut TV time and benefit the whole family. 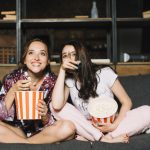