It’s never too late for women to lose weight to lower their breast cancer risk, a new study suggests.

Researchers found that a 5 percent or greater weight loss after menopause could lower the odds of breast cancer by about 12 percent. For a 170-pound woman, a 5 percent weight loss would be 8.5 pounds.

“A modest weight loss that seems to be sustainable could have important health consequences,” said lead study author Dr. Rowan Chlebowski. He’s a research professor in the department of medical oncology and therapeutics research at the City of Hope in Duarte, Calif.

“These are encouraging findings. You don’t have to get to a normal weight to see a benefit, and you don’t need to lose a colossal amount of weight. A 5 percent weight loss is achievable on your own,” Chlebowski added.

Obesity is a known risk factor for breast cancer. But Chlebowski said it hasn’t been clear if losing weight could prevent breast cancer. And if weight loss could make a difference in breast cancer risk, it wasn’t known if there was an optimal time to lose weight.

This study included data on more than 61,000 postmenopausal women from the Women’s Health Initiative, a large, long-running study of older women by the U.S. National Institutes of Health. The women were all ages 50 to 79 when they entered the study between 1993 and 1998. None had a history of breast cancer and all had a normal mammogram when the study began.

Women’s weights were measured at the start of the study and again three years later, Chlebowski said. Their health was then followed for an average of more than 11 years.

During that time, more than 3,000 women developed invasive breast cancer.

From the original group, more than 8,100 women lost 5 percent or more of their body weight. The researchers compared these women to more than 41,100 women whose weight remained stable.

The women whose weight remained stable had an average body mass index (BMI) of 26.7. BMI is a rough estimate of body fat based on height and weight measurements.

Women who intentionally lost weight in the study started out with a BMI of 29.9.

“Women who had a 5 percent or greater weight loss were heavier and less active,” Chlebowski noted.

The researchers found that when women lost even more weight — 15 percent or more of their body weight — the risk of breast cancer went down 37 percent.

There are a number of factors linked to weight loss, such as less inflammation, that could explain the lower risk of cancer, Chlebowski said. But the study did not prove that weight caused breast cancer risk to drop.

In addition to finding that losing weight was linked to reduced breast cancer risk, the researchers also looked to see what affect gaining weight had. More than 12,000 women gained weight during the study, and overall, that gain didn’t seem to boost the risk of breast cancer.

However, when the researchers looked at specific types of breast cancer, they saw a 54 percent increased risk of a type of cancer called triple negative breast cancer in women who gained weight after menopause.

Chlebowski said it’s not clear why weight gain would boost the risk of this specific cancer.

Dr. Virginia Maurer, chief of breast surgery and director of the breast health program at NYU Winthrop Hospital in Mineola, N.Y., said this is an important study that shows it’s never too late to lose weight.

“Losing weight and increasing exercise are two things you have control over,” said Maurer, who wasn’t involved with the study. “You’ll lower your risk of breast cancer, cardiovascular disease, diabetes, joint diseases and other cancers related to weight.”

She recommends three to four hours of aerobic exercise a week, along with some strength training.

Chlebowski was to present his team’s research at the San Antonio Breast Cancer Symposium, on Friday. Findings presented at meetings are usually viewed as preliminary until they’ve been published in a peer-reviewed journal.

Learn more about how weight is related to breast cancer risk from the American Cancer Society. 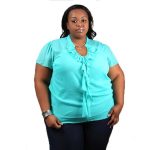