By sharing her experience, Lunden hopes she can help other women facing a frightening cancer diagnosis.

“It’s so shocking when you hear you have cancer, and you feel so vulnerable,” said Lunden, 67.

Lunden never missed an annual mammogram to check for breast cancer. But each year, she said the process was “nerve-racking” because she has dense breast tissue that can make it difficult to distinguish healthy breast tissue from tumor tissue.

Many women with dense breast tissue, particularly those with risk factors for breast cancer such as a family history, are advised to get additional testing — an MRI or sometimes an ultrasound. When Lunden went in for an ultrasound, she received shocking news.

At the time Lunden was diagnosed, her cancer was stage 2 — meaning it was still confined to the breast or nearby lymph nodes.

With triple negative breast cancer, there are few treatment decisions to be made.

Marilyn Leroy-Sterling is a nurse-practitioner and a health and wellness coordinator at Northern Westchester Hospital’s Cancer Treatment and Wellness Center in Mount Kisco, N.Y.

While you’re in treatment, Leroy-Sterling said, “it’s very important to realize that you’re not always in control anymore. You have to follow what your doctor and your body are telling you to do.”

Communicating with your cancer team can help you get through the difficult times, she noted. “Communication is so important, and no matter how small you think something is, your doctor needs to know if you’re struggling,” she added.

Often, the earlier you let your doctor or oncology nurse know that you don’t feel well, the sooner they can help with a treatment or therapy, said Leroy-Sterling.

Lunden said she had a moment where she thought about hiding her diagnosis from the public. But then she thought, “This wasn’t just about me. This is something that happens all the time, and here was a chapter in my life where I could make a difference.”

So she blogged during her treatments — she ended up having surgery, chemotherapy and radiation. Later, she teamed up with drug maker Amgen to create the “At Home with Joan” patient empowerment campaign. Amgen manufactures a drug that helps to prevent neutropenia, a potentially serious chemotherapy complication.

Lunden hopes to help women find ways to stay in control and cope with the many facets involved with a cancer diagnosis.

For example, how do you tell your kids about cancer? Lunden has three older girls, but also had two sets of pre-teen twins when she was diagnosed.

“With the younger ones, we contemplated not saying anything at first, but my oncology nurse told me that family secrets aren’t a good thing, and what kids imagine will be far worse than what’s really going on. So you need to sit them down and tell them — in an age-appropriate way — what’s going on,” she recommended.

And tips for women going through treatment?

If you have family or friends who can accompany you to doctors’ appointments or chemotherapy, Lunden said, that support can be very helpful.

Lunden said staying hydrated was a big issue for her. She’s always had trouble drinking enough, but it’s even more important to do so during treatment. She actually wore 10 bracelets on one arm, and moved them over to the other arm as she drank a cup of water so she had a visual reminder that she needed to drink water.

Fatigue is a problem during treatment, too, but Lunden suggested trying to schedule light activities like a walk with friends in the morning. “It’s easy to stay in bed and think about your symptoms and make yourself feel worse. Try to get up and do something. Try to stay engaged in life and hold on to normalcy,” she said.

But most of all, Lunden advised learning as much as you can about your particular cancer. “Breast cancer isn’t just one disease,” she said. “The more you know, the better you understand what’s going on.” 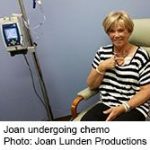