It’s the Latest Diet Craze, But Is It Safe?

What if you could have your cake, eat it, too, and lose weight?

A nutritional fad called CICO — short for “Calories In, Calories Out” — promises just that for those looking to shed some pounds.

The pitch is straightforward: Eat whatever you want, junk food included, and still shrink your waistline — as long as every day you expend more calories than you consume.

It’s a simplified approach to eating that essentially views fruits and vegetables through the same prism as candies and soda. All that matters is the total caloric tally.

“Being healthy isn’t just about weight loss alone,” noted Lona Sandon, program director and assistant professor of clinical nutrition at the University of Texas Southwestern Medical Center in Dallas. “You have to consider the whole package.”

Sandon acknowledged that those who adopt a CICO approach to eating “might actually lose weight.” But there’s a downside: “nutrient deficiencies or even malnutrition,” she warned.

“You may not be providing all the nutrients your body needs if you are not paying attention to the types of foods you are putting in your body,” Sandon said. “This could mean osteoporosis later in life, increased risk of cancer, heart disease, etcetera.”

“We are so obsessed with weight loss and being thin that we have lost sight of the fact that being healthy is everything,” she said.

“Severely restricting calories or food groups, along with rapid weight loss, are likely to backfire for many reasons, and the dieter will be left feeling frustrated,” she added.

Heller said research also suggests that weight cycling — yo-yo dieting — may “increase the risk for more problems down the road, such as obesity and cardiovascular disease.”

“Managing calories to achieve weight loss is important, but if important nutrients are missing, then muscle mass will decline, bone health, mental acuity and many other essential functions will be compromised,” Diekman said.

“As a registered dietitian, I constantly remind my clients that weight is not about the number on the scale,” she added. “It is about healthy muscle mass and body fat distribution.”

But if CICO isn’t the answer, what is?

Sandon pointed out that “canned diet plans rarely work and are hard to stick with.”

Instead, she advocates forgoing the “quick-fix mentality” in favor of a long-term resolution to embrace a “combination of healthy eating and exercise.”

For example, Sandon said, “Reduce calories by cutting back on portion sizes or use pre-portioned foods, such as frozen meals, to cut back on total food intake.”

“Include both cardiovascular exercise — such as walking briskly enough to get short of breath, or running, biking, swimming — and resistance exercises. To lose weight with exercise, aim for 300 to 400 minutes per week,” Sandon added.

She suggested that “if you are getting started now, just before the holidays, set small-step goals — [like] ‘I’ll eat a few more veggies,’ ‘I’ll eat a spoonful less’ or similar steps — allowing you to enjoy the holidays, but shifting to a focus on better lifestyle goals.”

Said Heller: “When we shift to a healthier eating pattern and lifestyle, we are also more likely to reach and maintain a healthy weight.”

The U.S. National Institute of Diabetes and Digestive and Kidney Diseases has information on myths about healthy eating. 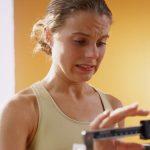