Mindlessly switching from your smartphone to other media devices and back again might lead to added pounds, scientists say.

It’s possible that these devices are actually changing the brain, theorized lead author Richard Lopez, a postdoctoral fellow in psychology at Rice University in Houston. In terms of weight, that could mean less self-control when fattening foods are at hand.

For their study, Lopez and his colleagues had 132 students, aged 18 to 23, answer questions about how much they multitasked and how distractible they were. Certain questions — such as, do you feel the urge to check your phone while you’re talking to someone else? — were designed to detect compulsive or inappropriate cellphone use.

The researchers found that study participants with higher scores on the questionnaire tended to weigh more than those with lower scores, suggesting a possible link between the two.

Next, Lopez’s team had 72 of the students undergo an MRI brain scan while they were shown a serious of pictures. Images of delicious, fattening foods were mixed in with the images.

When the food images were viewed, activity increased in the part of the brain linked to food temptation, the findings showed. These participants, who also tended to have more body fat, spent more time at campus cafeterias, the researchers said.

Of course the study cannot prove that multitasking makes a person fat, only that there seems to be an association. But Lopez believes the findings suggest a link between multitasking and obesity risk — the connection being the part of the brain that responds to temptation.

Noting that smartphones and tablets have only been around for about a decade, Lopez said it’s too soon to understand all the repercussions.

“We don’t know what the effects all these behaviors are having on how we respond to other aspects of our environment,” he said.

In future research, Lopez’ team hopes to learn if people with poor self-control are easily distracted by multimedia, or whether it’s that people who multitask electronically are likely to lose self-control over time.

At this point, “being mindful of multitasking is advisable,” Lopez said. “Being mindlessly pulled in different directions by these different devices is probably not good for us cognitively, and it may have effects on other behaviors.”

One expert said the study offers food for thought.

Do the same neurological predispositions favor media multitasking and overeating, Katz said, or does the activity alter the brain and foster obesity directly?

“This study raises concerns about the association, and invites us to ask more questions about the connection and answer them in subsequent studies,” Katz said.

“We have likely all heard that distracted eating is a peril for overeating, making bad choices and weight gain,” he added.

Eating more mindfully is a way of curbing temptation to eat too much or too many fattening foods, Katz believes.

The report was recently published online in the journal Brain Imaging and Behavior.

For more on obesity, visit the U.S. Centers for Disease Control and Prevention. 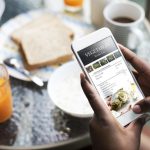