How Sleep Woes May Strain Your Heart

If you spend a lot of nights watching the clock instead of sleeping, new research suggests you may need to be as concerned about your heart health as you are about lost shut-eye.

People with genetic variants linked to insomnia have an increased risk of heart disease, heart failure and stroke, according to the study.

“A potential explanation for our observed associations between insomnia and heart disease and stroke is that insomnia problems potentially lead to the metabolic syndrome, including high blood pressure, increased body weight and type 2 diabetes, which increase the risk of coronary artery disease and stroke,” she said.

Insomnia affects up to 30% of the general population, the study authors said. More than 200 genetic variants are associated with insomnia complaints.

For the new study, the researchers looked at health information on more than 1.3 million people in Europe. The investigators compared whether or not genetic variants linked to insomnia were also associated with the risk of heart conditions and stroke.

The study found that people with a genetic predisposition to insomnia had a higher risk of heart disease, heart failure and stroke that affected large blood vessels. Other types of stroke were not increased.

The researchers also noted that the risk of a potentially dangerous irregular heart rhythm known as atrial fibrillation wasn’t linked to insomnia.

Certain conditions, including heart disease and risk factors for heart disease, such as sleep apnea, may cause difficulty sleeping, and that makes it hard to tease out which condition comes first.

But, that’s a strength of this research, Larsson said. Because they used genetic information to define insomnia instead of symptoms, it’s easier to see if sleep woes are directly related to the increased risk of heart problems and stroke.

There’s a flip side to that argument, however. Because it’s not clear if the study volunteers actually had sleep troubles, or if they just had genes that made insomnia more likely, it’s hard to say if insomnia symptoms are truly the cause of these heart concerns and strokes.

Dr. John Osborne, an American Heart Association spokesperson and director of cardiology at State of the Heart Cardiology in Southlake, Texas, said he won’t be losing any sleep over the findings.

“It’s interesting, and they used a powerful statistical technique that appears to be pretty accurate at identifying causal relationships. But the study didn’t identify how severe insomnia was or if people just have a tendency to insomnia,” he explained.

And, he said, the links they did find between insomnia and other conditions were only weak associations. Plus, the study was done in a European population. The findings may not be the same in more diverse groups of people.

Still, both experts said it’s a good idea to get the sleep you need for your health.

Larsson suggested that “individuals with poor sleep should try to change their habits and reduce stress in order to improve their sleep. Our genetic make-up has only a very minor influence on our risk of insomnia, which is mainly driven by behaviors, stress and other environmental factors.”

Osborne said stress management can help with sleep, as can avoiding stimulating substances like cigarettes and caffeine. He said to talk to your primary care doctor if you’re having a lot of trouble getting a full night’s sleep.

The study was published Aug. 19 in the journal Circulation.

Learn more about the connection between sleep and heart health from the U.S. Centers for Disease Control and Prevention. 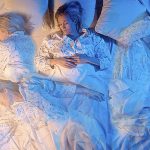