Obtaining a restraining order may not be enough to prevent domestic violence, but when state laws require the removal of firearms, risk of those violent crimes goes down, a new study says.

In states that require people with restraining orders against them to surrender their firearms, the intimate partner murder rate dropped by 10 percent. In states that don’t require surrender, the rate went down less than 7 percent, the study found.

And the rate of these firearm-related crimes fell 15 percent in states that require surrender, researchers said.

But, just as laws restricting firearm surrender vary from state to state — some have “possession” laws while others have “surrender” laws — the protection for victims isn’t always the same.

“Most of the prior research on this topic that have looked at gun laws looks just at whether states have or don’t have a particular law,” explained study author Dr. Michael Siegel, professor of community health sciences at Boston University School of Public Health.

“But we wanted to do a much more detailed coding of the laws so that we could get into the fine details, such as not only is there a law that prohibits firearm possession, but whether they are actually required to surrender the guns,” he said.

Currently, more than 1,800 people die from domestic violence in the United States every year. About half of these homicides are committed with firearms. Approximately 85 percent of victims are women.

In 1994, a federal law barred firearm possession if someone was accused of intimate partner violence. But the federal government is limited in its ability to enforce the law. States had to develop their own laws based on these federal guidelines, the study noted.

“We found that simply passing a law saying that people who are subject to domestic violence restraining orders cannot possess a firearm really didn’t have an impact on rates of intimate partner homicide,” Siegel explained.

“However, if the state also required that people subject to those requirements surrender the weapons that they already have, then we found a very large and significant impact on decreasing intimate partner homicide rates,” he said.

The study concluded that of the states with surrender laws, the rates of intimate partner homicide dropped significantly compared to states where no law was passed.

But, according to Siegel, it’s not simply about passing a law, it’s also about enforcement.

“We shouldn’t just rely on people proactively walking into a police department and saying, ‘Oh, here, I was just issued a restraining order and I wanted to be proactive and give you all of my guns,'” Siegel said.

He suggested that enforcement mechanisms must be put in place to guarantee that firearms are removed.

Some states, Siegel said, do this better than others.

Police Chief David Ryan from Pound Ridge, N.Y., said, “Even though there are loopholes in the federal guidelines, with every order of protection that we receive, we insist on a surrender of all weapons.

“We don’t care what the circumstances are, whatever the violation is, whether it’s federal court, civil court or criminal court, I insist on the surrender. And, because there are loopholes in the federal law, once I have them, I’m not giving them back.”

In states that have surrender laws, the researcher’s models for 2015 suggest that there were 75 fewer homicides linked to domestic violence than were expected.

If all states had these laws in place, there would have been an additional 120 fewer intimate partner homicides across the nation in 2015, the researchers said.

Ryan explained that it’s important to have a lethality assessment for getting a restraining order with firearm surrender.

“You can do that if you can show the violent behavior at whatever level it is — physical, psychological or verbal, along with what I call contributing factors, such as mental health issues, substance abuse, losing a job or a prior conviction of a crime,” he said.

Siegel hopes that this study will encourage other states’ policymakers and law enforcement to pass and enforce these laws in a similar manner.

The study was published Sept. 18 in the Annals of Internal Medicine .

Visit WomensLaw.org to learn about how to leave a domestic abuser. 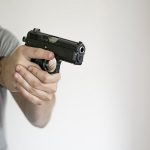