People suffering from regular migraines despite medication might consider investing in a yoga mat.

That’s according to a new trial that tested the effects of a gentle yoga practice — with slow-paced physical postures, breathing exercises and relaxation. Researchers found that people who added the practice to their usual migraine medication suffered about half as many headache attacks as they normally did.

In contrast, study patients who stuck with medication alone saw only a small decline in migraine flare-ups.

The findings appear in the May 6 online issue of the journal Neurology.

Worldwide, an estimated 1 billion people have migraine headaches, according to the Migraine Research Foundation. For people who suffer frequent episodes, there are medications that can help prevent them. But it may not be enough.

“The good news is that practicing something as simple and accessible as yoga may help much more than medications alone,” lead researcher Dr. Rohit Bhatia, a neurologist at the All India Institute of Medical Sciences in New Delhi, India, said in a journal news release. “And all you need is a mat.”

Instruction helps, too, however. In this study, migraine patients first had classes with a yoga teacher three times a week for one month. After that, they practiced at home with a manual for another two months.

By that three-month mark, their average headache frequency had dropped. They also felt their migraines were less disruptive to their daily lives, based on a standard rating scale.

Migraines cause episodes of intense head pain, along with symptoms like nausea, visual disturbances and sensitivity to light and sound. Some people need to take preventive medication, but lifestyle choices — including sufficient sleep, regular meals and exercise — are always key, experts said.

But a problem for some people is that higher-impact exercise, like running, can be a migraine trigger, said Colman, who was not involved in the study.

So yoga may offer a lower-impact way to be active, she said.

Beyond physical exercise, yoga includes other ways to practice “mindfulness” — such as breathing practices, relaxation techniques and meditation.

And research shows that in general, mindfulness practices can support the parasympathetic nervous system, said Dr. Cynthia Armand, a neurologist at the Montefiore Headache Center in New York City.

That’s the “rest and digest” arm of the nervous system, explained Armand, who was not involved in the study. It puts the brakes on the sympathetic nervous system — which governs “fight or flight” and its accompanying surge in stress hormones.

For the study, Bhatia’s team recruited 160 adult patients in India with episodic migraines — meaning between four and 14 a month. Most were taking preventive medication, mainly certain blood pressure drugs or antidepressants.

The researchers randomly assigned half to add yoga to their usual medications; all patients were given lifestyle advice.

“I think people can be encouraged by this, and consider adding yoga to their standard care,” Colman said.

An important point, Armand said, is that it appeared safe. No study participants reported suffering headaches or nausea during their yoga practice.

A caution, though, is that yoga exists in many different styles. The practice in this study consisted of gentler poses and plenty of breath work and relaxation — not the fast-paced and strenuous styles offered in many real-world classes.

Colman recommended people with migraines avoid “hot yoga,” which is practiced in heated rooms, since dehydration is a major trigger of headaches.

Armand agreed on that point, and said that in general, it’s wise to know what kind of yoga you’re getting into beforehand.

“You want to make sure you’re at the right place, with the right instruction,” she said.

The American Migraine Foundation has lifestyle advice for those with migraine headaches. 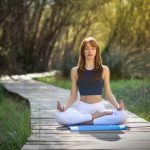