Focus on Just One Sport Can Mean Stress for Girls

Sometimes, being too invested in just one sport may not be the best idea, new research shows.

The study found that teen girls who focus only on one sport — in this case, soccer — tended to have more stress and poorer sleep than girls who also played other sports.

The study couldn’t definitively “answer whether sport specialization itself interferes with a youth athlete’s sleep and well-being,” said study lead author Dr. Drew Watson. However, “it does suggest there are differences between single and multi-sport youth athletes,” he said.

Those differences “could affect injury risk, performance or lifelong athletic participation,” added Watson. He’s assistant professor in orthopedics and rehabilitation at the University of Wisconsin School of Medicine and Public Health in Madison.

The small study followed 49 female soccer players for a four-month soccer season. The players were from Wisconsin, and all were between 13 and 18 years old.

The two groups didn’t differ in age, years of experience or in-season training load. But despite getting the same amount of sleep (just over 8 hours a night), those in the specialized group had higher stress levels, poorer sleep and mood, and greater fatigue and soreness than those in the non-specialized group.

Previous research has found that specialization in a sport at an early age may affect whether athletes will suffer injuries or leave a sport, Watson said.

“Further research is needed to determine whether this can help explain differences in injury risk or long-term athletic success,” he said in an American Academy of Pediatrics news release.

The research was presented recently at the academy’s national meeting, in Chicago. Findings presented at meetings are typically viewed as preliminary until they’ve been published in a peer-reviewed journal.

The American Academy of Pediatrics has more on sports. 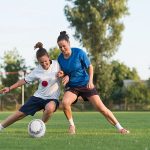