Exercising on an Empty Stomach: Good Idea or Not?

It’s an age-old question, whether it’s better to exercise before or after eating.

Research done in the United Kingdom might provide the impetus for some people: According to a small study, exercise burns more body fat when you do it on an empty stomach.

The research compared the effects of exercising after eating breakfast to exercising in a fasting state, meaning nothing eaten after dinner the night before. The participants did a moderate-intensity treadmill workout, followed by a recovery drink and, later on, a pasta-based lunch.

After calculating energy in through food and energy out through exercise, the researchers found that exercising in fasting mode can lead to burning 20 percent more calories than exercising after breakfast.

Some people, however, get lightheaded if they exercise on an empty stomach. In that case, get up early enough to have a small breakfast at least one hour before your workout. Remember that eating too close to exercise is counter-productive.

General guidelines for exercising after eating:

If you’re a confirmed morning coffee drinker, it’s probably fine to have a small cup of joe before you work out. But since it acts like a diuretic, it’s even more important to sip water before, during and after exercise to avoid dehydration.

After exercise, have some protein and carbs within two hours to help muscles recover. A post-exercise meal can be a simple choice like banana slices with peanut butter, or a turkey wrap.

The Mayo Clinic has more tips on exercise and eating to help you work out efficiently. 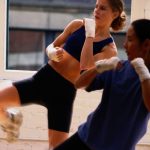