An antidote to teenage depression might be found in school gymnasiums and on sports fields, a major new review argues.

Supervised exercise programs are associated with significant reductions in symptoms of depression among children and teenagers, according to the analysis of data from 21 studies involving more than 2,400 kids.

“This is the first time that we’ve been able to put enough studies together so that we can make a pretty good conclusion to answer the question, ‘Is physical activity and exercise good for children with depressive symptoms?’” said co-study author Walter Thompson, a retired professor of exercise physiology with Georgia State University in Atlanta. “The answer is overwhelmingly yes.”

Further, the data indicate a specific dose of exercise that will produce the biggest benefit in children: Around an hour of physical activity three days a week provided the best relief for symptoms of depression.

“And you know, that’s pretty close to what the federal government has recommended as regular exercise for both children and adults, somewhere between 75 and 150 minutes a week,” Thompson said.

The study also found that exercise programs shorter than 12 weeks produced greater benefits — possibly because such a tightly defined program allows participants a positive sense of achievement and accomplishment, according to an editorial co-authored by Eduardo Bustamante, an assistant professor of kinesiology and nutrition at the University of Illinois, Chicago.

“These physical activity programs that we have are reducing depressive symptoms without even trying,” Bustamante said. “We’re getting this impact without even really explicitly trying to reduce depression.”

These results offer a potential response to a mental health crisis that’s been affecting American teens and young adults in the wake of the pandemic and other major societal shifts.

In 2021, nearly one in four young adults said they had recently sought and received mental health treatment, according to a report from the U.S. Centers for Disease Control and Prevention.

Depression is the second most common mental disorder among children and teens, and is a strong predictor of future mental disorders and suicide, the study authors said in background notes.

Up to 67% of young people with depressive symptoms are at risk of developing full-blown depression or anxiety in adulthood, the researchers said.

Teens benefited the most

For the study, the research team pooled data drawn from 21 previous clinical trials in which children and teens participated in physical activity programs.

The trials might have been aimed at studying something other than mental health — for example, obesity, educational success or ADHD (attention-deficit/hyperactivity disorder) — but they all included tools that rated the participants’ symptoms of depression.

The researchers found that the most benefit occurred in participants over 13.

That makes sense, given that states generally phase out their physical education requirements around the 5th grade, Thompson said.

“About age 12, once a kid enters middle school, there’s no longer a physical education requirement,” Thompson said. “What that means is they’re not getting the structured physical activity that the younger kids are getting. So what we’re seeing is an increase in depressive symptoms, which translates to a clinical diagnosis of depression, which then follows them into high school and into adulthood.”

The analysis, which was published online Jan. 3 in JAMA Pediatrics, also revealed a greater benefit from exercise among children who had already been diagnosed with depression or another mental illness.

“That wasn’t a surprise,” said Dr. Anish Dube, chair of the American Psychiatric Association’s Council on Children, Adolescents, and their Families.

“One of the more prominent symptoms [of depression] can be physical inactivity or physical inertia, and the lack of desire to want to do something,” Dube said. “So in a sense physical activity itself is similar to an intervention that we would call behavioral activation,” in which patients engage in meaningful activities to subvert this depressive lethargy.

There are several reasons why physical activity might help ease depression, experts said.

Physical activity also can make a kid feel better by making their bodies healthier and by promoting high-quality sleep, the experts added.

“We have evidence that when kids exercise, their [brain] white matter improves, and so the parts of your brain that are communicating between regions kind of becomes more interrelated and more efficient,” Bustamante explained. “We have data that you see more activation in areas relevant to the cognitive task at hand. So, the parts of kids’ brains that are responsible for focus are more active after they’ve exercised.”

It’s also likely that exercise makes kids feel better because they’re interacting with other kids and adults, and getting their minds off of their troubles, said Mitch Prinstein, a developmental psychologist and chief science officer for the American Psychological Association.

“When we’re exercising, we tend to be thinking about nothing but the exercise because it’s physically taxing on our bodies, and that’s a good thing,” Prinstein said. “That promotes a mindfulness, a mindful awareness of the here and now. And that sometimes takes us out of more of a ruminative style when we’re depressed, which is kind of really thinking or worrying or being concerned about recent stressors.”

However, Thompson and the other experts noted that these results mostly came from organized and supervised exercise programs.

“It’s easy for us to say go outside and play, but we don’t know what that means. Some kids will go outside and their idea of play is to get on their phones,” Thompson said.

Thompson encourages parents to go to their kids’ school and make sure they are enrolled in physical education classes or extracurricular sports, so they can develop healthy habits that will follow them into adulthood.

Even though middle and high schoolers often aren’t required to take physical education classes, many schools do offer the classes as an option, Thompson said.

“Tennis requires skill, but where do you learn that? Well, a great place to learn that skill for a lifetime devotion to that sport is in middle school and high school,” Thompson said.

Parents also can get their kids to exercise more often by showing them how it’s done, incorporating regular physical activity into their own lives, he suggested.

Harvard Medical School has more about exercise as a treatment for depression. 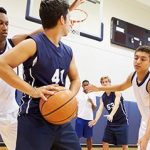