End of Roe v. Wade May Have More Women Opting for Permanent Contraception

Jasmine Quezada, a Los Angeles tax accountant, says she has known since age 10 she never wanted to be a mother.

“I never thought parenthood was for me and that was no secret to my family or my friends,” Quezada, 31, said. “When I was dating my husband, we often discussed my choice to remain child-free. I had an aversion to hormonal birth control and serious side effects when I tried using a non-hormonal IUD [intrauterine device], so I was looking for a permanent way to avoid getting pregnant.”

Her solution: She had her fallopian tubes — the tubes connecting the ovaries to the uterus — removed by a doctor at Cedars-Sinai in Los Angeles.

More women like Quezada are asking about permanent contraception in the wake of the U.S. Supreme Court decision that eliminated a federal right to abortion, according to the Southern California medical system.

It’s a concern echoed throughout the United States, doctors there say.

“We are experiencing a significant increase in requests for consultations about the option of permanent contraception from women who want to remain child-free. They are expressing serious concern about their ability to have control over their reproductive health,” Dr. Natasha Schimmoeller said in a medical system news release. She’s an obstetrician and gynecologist in the Cedars-Sinai Family Planning Program.

Permanent contraception includes procedures such as removal of a woman’s fallopian tubes. This permanently prevents pregnancy, but without changing a woman’s hormones or periods like removal of her ovaries would do.

“Patients are expressing anxiety about the possibility of future restrictions on medication abortions, morning-after pills like Plan B, or even routinely used methods of birth control such as IUDs, implanted to prevent pregnancy,” Schimmoeller said.

Quezada, a patient of Schimmoeller’s, said the Supreme Court decision overturning Roe v. Wade and restrictions in many states firmed up her decision for permanent birth control now.

Another patient goes by the name Kat C., which is a pseudonym meant to protect her privacy. A database administrator in Los Angeles, this 37-year-old has complex health problems associated with autoimmunity and was concerned about the current legal challenges to reproductive choice.

Kat C. found a “child-free” community on the social platform Reddit that led her to Schimmoeller. Prior to that, she said she faced a lot of push back from medical providers.

“During my consultations, I was frequently told I would regret the decision not to have children or that I would grow out of it. One doctor assumed that a cancer diagnosis or depression had brought me to their office. Another even called it a selfish decision,” Kat C. said.

Both women had an outpatient procedure called a laparoscopic bilateral salpingectomy.

“It’s same-day surgery with general anesthesia. I use tiny instruments and make three very small incisions; one inside the belly button and two near the hip bones. The minimally invasive procedure takes about an hour,” said Schimmoeller, who is board certified in complex family planning.

“We want the patient up and moving around as soon as possible, and then we send them home the same day with a limited course of prescription painkillers,” Schimmoeller said.

Quezada is happy about her choice.

“I made this decision for myself, with the support of people I care about. I am no longer suffering from the side effects of contraception, and I took an important step to continue to have control over my own fertility. My husband and I love animals and our dog, Sadie, is a beloved part of our family. It’s a good life,” Quezada said.

Tubal ligation — having your “tubes tied” — is another option for permanent sterilization. It, too, is performed on an outpatient basis.

The American College of Obstetricians and Gynecologists has more on sterilization. 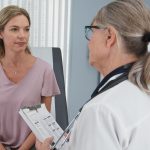