Early Menopause May Be Tied to Type 2 Diabetes

The earlier a woman begins menopause, the greater her risk of developing diabetes, a new study suggests.

Following almost 4,000 women in the Netherlands, Dutch researchers found that those who went through menopause before age 40 were almost four times as likely to develop type 2 diabetes as women whose menopause was late — at 55 or older.

The average age for menopause in the United States is 51, according to the National Institute on Aging.

Overall, the risk of developing diabetes fell 4 percent for each added year before menopause, according to the study.

Their results were published July 18 in the journal Diabetologia.

The study doesn’t show a direct cause-and-effect relationship between early menopause and diabetes. Still, “future studies are needed to examine the mechanisms behind this association and explore whether timing of natural menopause has any added value in diabetes prediction and prevention,” the researchers added in a journal news release.

For the study, they followed 3,969 women, ages 45 and older, for roughly nine years. The researchers examined their medical records and answers to questionnaires. During that time, 348 developed type 2 diabetes.

Women whose periods stopped between 40 and 44 were 2.4 times more likely to develop diabetes. Menopause at ages 45 to 55 was linked to 60 percent higher odds for diabetes compared to menopause at later ages, according to the study.

The U.S. National Institute on Aging has more about menopause. 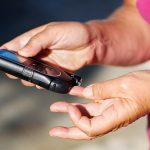