Living in the city can be hard on the senses and the spirit, but spending some time in a tree-lined park could counteract that stress, new research suggests.

“Over a three-month period, we collected tweets from 4,688 Twitter users before, during and after they posted from the park,” explained study author Aaron Schwartz. He’s a Ph.D. candidate at the University of Vermont’s school of environment and natural resources and the Gund Institute for Environment.

All of the 160 parks that were visited in the study were located in the city of San Francisco.

About 100,000 tweets were analyzed by a hedonometer, a kind of online happiness dictionary that ranks words according to their happiness content. Tweeting “jail,” for example, would bank a score of less than 2, while a tweet of “hahaha” would render a score nearly 8.

After comparing pre-park tweets to post-park tweets, the study authors concluded that parks trigger a mood bump equivalent to that seen at Christmas, the day hedonometer happiness levels hit their peak.

The team didn’t track how long participants spent in parks, so they can’t say how short a visit might trigger a mood change.

And some parks turned out to be better mood boosters than others.

Why? For one, bigger parks may lend themselves to activities not possible in smaller parks, such as BBQs or longer quiet walks, said Schwartz.

“These parks might also offer a greater separation for disconnecting from the stressful urban environment due to their size,” he added. Larger parks also expose visitors to “higher levels of biodiversity, which has been shown to lead to improved mood as well.”

Still, happiness increases were seen across the board, regardless of park type. And once happiness levels went up, they stayed up for one to four hours.

As to what explains the park-happiness connection, the team said it’s hard to say for sure, and they still can’t be sure that one actually causes the other. Nor is it clear that Twitter users are representative of everyone.

But the authors did observe that negative language fell off just after a visit to a park, as did the tweeted use of first-person words, such as “I” or “me.” Both suggest a shift in mental focus towards a more positive and more collective mindset.

The finding was published Aug. 20 in the journal People and Nature.

Kit Yarrow, a consumer psychologist and professor emeritus at Golden Gate University in San Francisco, said she thinks that “most people don’t know that their unconscious mind is craving nature.”

Yarrow pointed out that “there is a lot of research to support that being in nature, even just around plants, makes us happy.”

Why? “It’s likely to be related to better quality air, the mental and emotional arousal of visual beauty, and our very fundamental human need to be part of nature,” said Yarrow. “What we perceive as happiness when we’re in an urban park is also likely to be more powerful today than in previous decades, because it is a relief from the sterility of our increasingly digital lives.”

And that’s not gone unnoticed by those who’ve grown up in the digital age, she observed. “There’s a giant movement going on right now among millennials,” she said. “They’re filling their offices and homes with plants to promote well-being and stress reduction.”

Yarrow’s take: if the goal is to promote happier, healthier and more connected communities, “for sure, city planners would benefit from taking this research to heart.”

“Any efforts to ‘green our cities’ will provide not only mental benefits,” he said, “but potentially a variety of other ecosystem services that benefit urban residents and nature alike. For example, greenery can soak up carbon emissions, reduce air pollution and provide habitat for species. More and more people are living in cities each year, and providing them with opportunities to engage with nature is critical for well-being.”

For more on the connection between being outdoors and health, visit Harvard Medical School. 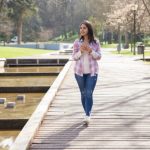