There’s a lack of clear evidence on how testosterone levels affect women’s athletic performance. To learn more, Swedish researchers gave 48 physically active, healthy women between the ages of 18 and 35 either 10 milligrams (mg) of testosterone cream or 10 mg of a placebo cream every day for 10 weeks.

The researchers, led by Angelica Linden Hirschberg from the Karolinska Institute in Stockholm, assessed how testosterone levels affected aerobic performance by measuring how long the women could run on a treadmill before becoming exhausted.

The women in the testosterone cream group also had much larger gains in lean muscle mass than those in the placebo group.

On average, testosterone levels among women who received the hormone cream rose to levels that were below the average range in men. Yet, that level significantly increased the length of time they could run before reaching exhaustion, according to the study published online Oct. 15 in the British Journal of Sports Medicine.

Female athletes with naturally high testosterone levels must lower their levels to below 5 nmol/l of blood to be eligible to compete at international level in middle distance races, the International Association of Athletics Federations says.

The policy has been widely criticized and challenged in court.

“Our results are therefore of great importance for the ongoing discussion of whether it is fair to allow athletes with naturally high testosterone to compete in the female category without reducing their hormonal concentration to the female range,” Hirschberg and her colleagues concluded in a journal news release.

The Hormone Health Network has more on testosterone. 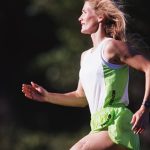