Big Decline in Births to Girls Under 15, CDC Says

There’s been a steep decline over the past two decades in births to American girls under the age of 15, a new report finds.

And the pace at which these declines have occurred has accelerated over time, the CDC noted, with the greatest improvements seen since 2008.

Why these much-welcomed trends?

The CDC researchers said that “a number of factors have been cited,” including a trend among the very young to delay first sex; decreased frequency of sexual activity; and “for sexually active teenagers, the use of effective contraception.”

Dr. Jennifer Wu, an obstetrician/gynecologist who works with young girls and women, called the report “a huge victory from a public health standpoint.”

“Pregnancies at such a young age pose large risks to the young mother,” she noted. “Often the pelvis is still small and these pregnancies may end up requiring cesarean sections. This then has implications for future pregnancies.”

And of course there’s the impact that becoming pregnant so young can have on long-term outcomes for mom and baby.

According to study co-authors T.J. Mathews and Brady Hamilton, “Childbearing by very young mothers is a matter of public concern because of the elevated health risks for these mothers and their infants and the socioeconomic consequences.” Mathews and Hamilton work at the CDC’s National Center for Health Statistics (NCHS).

There was more good news from the report: The “race gap” in births to underage girls is also shrinking. In fact, the largest decline in births for girls aged 10 to 14 occurred among black girls, the findings showed.

The birth rate among black girls in this age group tumbled from 2.4 per 1,000 in 2000 to just 0.5 per 1,000 by 2016, according to the report. Similar steep declines were also seen among Hispanic and Native American girls.

Not every state benefited from these trends equally, however. Births to young girls tended to be highest in southern states, with Louisiana and Mississippi maintaining rates above 0.5 births per 1,000, the investigators reported. Delaware and the District of Columbia also had relatively high rates.

“Some of the states with the greatest reductions have worked hard at providing sexuality education programs in the schools,” noted Dr. Brett Worly. He’s an obstetrician/gynecologist at Ohio State University Wexner Medical Center in Columbus.

On Friday, the Trump administration announced it will focus on “abstinence-only” programs aimed at preventing teen pregnancies. Worly said that “it will be interesting to see how states with extensive sexuality education programs in public schools fare, compared with states where abstinence-only is taught.”

And another expert said it’s still too early for celebration over the new CDC numbers.

Dr. Michael Grosso is chair of pediatrics at Northwell Health’s Huntington Hospital, in Huntington, N.Y. He noted that, despite some improvements, “U.S. [teen birth] rates remain among the highest among industrialized countries.”

The findings were published April 25 as an NCHS Data Brief.

There’s more on helping kids avoid pregnancy at the American Academy of Pediatrics. 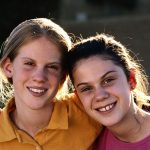