Too much anxiety isn’t good for anyone, but a new study suggests it is particularly perilous for pregnant women because it can raise the chances of their child being born early.

Given that finding, the researchers recommended that doctors screen for anxiety during the first and third trimesters of pregnancy.

“Anxiety about a current pregnancy is a potent psychosocial state that may affect birth outcomes,” said lead study author Dr. Christine Dunkel Schetter, of the University of California, Los Angeles. “These days, depressive symptoms are assessed in many clinic settings around the world to prevent complications of postpartum depression for mothers and children. This and other studies suggest that we should also be assessing anxiety in pregnant women.”

Researchers have previously found that up to one in four pregnant women have high anxiety symptoms, and that anxiety can be a risk factor for preterm birth. Scientists have also measured anxiety at different times during pregnancy, with the second trimester being the most common time when women experience the most anxiety. The latest research was published online Sept. 26 in the journal Health Psychology.

To tease out these different effects of timing and type of anxiety, the researchers looked at data from the Healthy Babies Before Birth study. This particular study looked at 196 pregnant women from Denver and Los Angeles.

During the first and third trimesters of their pregnancies, the researchers gave the women four different anxiety scales. One was a five-question screen for general anxiety, and the other three were specific to pregnancy: a 10-question survey; a four-question scale of anxiety related to pregnancy; and a nine-question assessment of a wider range of stressors related to pregnancy, such as medical care and worries about taking care of a newborn.

The investigators also found that anxiety during the third trimester of pregnancy was most strongly linked to babies being born earlier, but general anxiety during the first trimester also raised the risk of giving birth earlier than expected. Researchers think that general anxiety early in pregnancy could make women more likely to worry about things like medical risks, the baby’s health, labor pain, delivery complications, and parenting. Even when the medical risks of the women’s pregnancies were taken into account, the results stayed the same.

“Although not all women who begin pregnancy with general anxiety symptoms will later experience pregnancy-specific anxiety, our results suggest that women who do follow this progression are likely to be especially at risk for earlier delivery,” Dunkel Schetter said in a news release from the American Psychological Association.

According to the researchers, the findings suggest it is vital for doctors to screen women for general anxiety early in pregnancy, just like they do for depression, and that women who score high should be watched for an increase in anxiety and possibly need to be monitored later in pregnancy.

“Increasing precision in our understanding of both the risks and mechanisms of the effects of pregnancy anxiety on gestational length can improve our ability to develop, test and implement interventions to address the pressing public health issue of preterm birth,” Dunkel Schetter said.

The Mayo Clinic offers a breakdown of a pregnancy through each trimester. 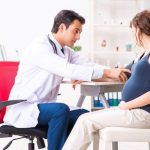