America’s Love Affair With Sleeping Pills May Be Waning

Fewer Americans are turning to sleep medications to fight insomnia.

After a dramatic rise in prescriptions for drugs like Ambien, the trend has ebbed, according to a new study, and fewer doctors are prescribing sleep medications. Use of these sleep aids dropped 31% between 2013 and 2018, researchers found.

“There are several possible reasons for this decline; for example, there’s a greater awareness of the potential dangers in the use of these medications,” said lead researcher Christopher Kaufmann. He’s an assistant professor in the Department of Health Outcomes and Biomedical Informatics at the University of Florida.

“Also, there’s been a recent upsurge in behavioral treatments for improving sleep that don’t have the potential adverse outcomes that some medications might have,” Kaufmann said.

The biggest drop-off (86%) in use of sleep drugs was seen among those over 80.

Before this new decline, researchers had reported that between 1993 and 2010, prescriptions for benzodiazepines jumped 69%. The drugs, which treat anxiety and insomnia, include diazepam (Valium) and alprazolam (Xanax). Over the same period, prescriptions for zolpidem (Ambien) rose 140%.

The surge was driven by direct-to-consumer marketing, particularly of Ambien in the early 1990s, as well as greater awareness of the benefits of sleep, Kaufmann said.

Since then, use of all types of sleep medications dropped, with the biggest decline (55%) in federally approved sleep aids.

For the study, Kaufmann’s team used data from 29,400 participants in a U.S. government health survey conducted every two years.

Researchers said the decline was driven by data pointing to unwanted side effects of the medications. Among those are daytime drowsiness, as well as higher risk for car crashes, memory loss among older patients and falls that resulted in broken hips.

Kaufmann noted that these drugs were originally designed for short-term use to get people through bouts of insomnia as they reprogramed their sleep habits. Instead, many patients became chronic users.

“I think that people are beginning to become aware of the potential pitfalls of the use of these medications,” Kaufmann said.

“Cognitive behavioral therapy for insomnia is a more durable and safe option to treat insomnia,” said Hahn, who reviewed the study findings.

The therapy helps identify thoughts, feelings and behaviors that contribute to insomnia. In other words, it gets at the underlying causes of sleep problems.

With the heightened awareness of the negative effects of sleep drugs, primary care doctors don’t feel comfortable ordering them for long-term use without investigating other options, Hahn said.

She recommends several steps to help her patients get a good night’s sleep:

If you take a supplement like melatonin to help you sleep, be sure to take it hours before bedtime, Hahn said.

“If you’re taking it too close to bedtime, it can actually mess up your circadian rhythm,” she said, adding that while it’s not a great sleep medication, it can help patients with jet lag or shiftwork disorder.

The findings were recently published online in the Journal of Clinical Sleep Medicine.

The Mayo Clinic has more about prescription sleep medications. 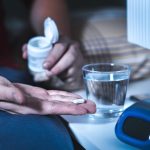