America’s Gyms Are Reopening and Your Workout Will Change

Gyms are finally reopening across the United States, but your workout will not be the same.

Some chains are offering individual workouts while group classes are still on hold, post-workout showers will be done at home, the 6-foot rule is in place for gym patrons, and sanitizing your hands and equipment frequently is a must.

“Y members should expect that facilities will look and operate different than what they’re used to,” said Ryan O’Malley, national director of public relations at the YMCA.

“We know our members are anxious to rejoin us, but we have to do this safely and responsibly,” he said.

According to data from the International Health, Racquet & Sportsclub Association (IHRSA), a trade group, nearly 61 million Americans are members of at least one fitness club. That’s a lot of pent-up need to get moving again, as stay-at-home orders begin to relax after months of lockdown.

Meredith Poppler, vice president of communications at IHRSA, said restrictions will vary from gym-to-gym. Some gyms — like the Y — aren’t offering group classes yet, while other fitness clubs may, but under new rules.

Gyms might even restrict how many patrons can be in a facility at any one time, amounting to roughly 30% to 50% of actual capacity, Poppler said. At many centers that could mean a “workout reservation” system, rather than patrons dropping in spontaneously.

Gyms are also going to become “hypervigilant” when it comes to cleaning and disinfection measures, Poppler said. Maybe because of all the sweating going on, some people have the notion that gyms are somehow “dirty or germy,” she said, although gyms are “no dirtier than many other businesses.”

Still, “many wet areas like showers, steam rooms, and pools will not be able to open even when the clubs are allowed,” Poppler noted. “Also, where possible, classes, equipment and programming will be moved outside. And, of course, no high-fives after a tough workout.”

Then there’s “social distancing.” That’s being enforced in a number of ways.

Most gyms “are moving and/or unplugging equipment so that it’s all 6-feet apart, installing partitions between cardio equipment, and staggering group training classes in ways that don’t create unnecessary traffic congestion,” she said.

Courthouse Club Fitness, a small chain with locations across Salem and Keizer, Oregon, has posted detailed guidance about its reopening protocols on its website. The rules they’ve already put in place seem similar to IHRSA’s advisory.

Following regulations laid out by Oregon’s “Phase 1” business reopening plan, Courthouse is telling customers that, for now, all pools and childcare facilities are closed. Locker rooms are for restroom-use only, with showers and lockers remaining off limits. Team sports such as basketball are also not permitted, though solo practice sessions are allowed.

The gym is requiring users to maintain a 6-foot distance from one another at all times, and asks them to “thoroughly clean all equipment before and immediately after use.”

What about masks? Courthouse says masks are “encouraged” but not required, unless remaining 6-feet apart is impossible.

Similar steps are being taken at the Y. In a reopening announcement emailed to members of one Los Angeles branch on Friday, the Y noted that staff will be wearing masks and gloves, water fountains are closed, gym patrons will have temperatures taken via remote scanner upon entry, hands are to be sanitized upon entry and exit, showers and saunas are closed, equipment has been spaced apart, and stringent disinfecting procedures will be in place.

“We are seeing Ys reopen facilities in phases similar to those recommended by federal and state authorities,” O’Malley noted. “A fitness facility may partially reopen with cardio and weight machines spread out or marked as not for use, to allow physical distancing. But group fitness classes may not be available yet, or in some cases they are hosting group classes outside.”

Expect to sign some forms, too. Fitness clubs, like many other businesses, may start asking members to absolve them in advance of any COVID-related health issues associated with a workout.

The Y is asking patrons to sign a waiver, as is Courthouse Club Fitness.

There’s more on COVID-19 prevention at the U.S. Centers for Disease Control and Prevention. 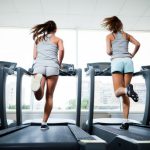