Over the past four decades, the U.S. has seen a sharp rise in the number of pregnant women with high blood pressure, new research reveals.

For the study, the researchers analyzed data from about 151 million hospitalizations between 1970 and 2010 to determine the rates of chronic high blood pressure in pregnant women aged 15 to 49.

Since 1979, the rate increased an average of 6% every year, the study findings showed.

White women had a slightly higher annual increase (7%) than black women (4%), but black women were more than twice as likely to have high blood pressure during pregnancy.

The report was published Sept. 9 in the journal Hypertension.

“Women who already have high blood pressure and are planning to become pregnant should work closely with their health care provider to closely monitor and manage their blood pressure, especially during pregnancy, to reduce the serious health risks to both themselves and their unborn child,” study author Cande Ananth said in a journal news release.

Ananth is chief of epidemiology and biostatistics in the department of obstetrics, gynecology and reproductive sciences at Rutgers Medical School in New Brunswick, N.J.

He noted that older mothers were more likely to have chronic high blood pressure.

The U.S. Centers for Disease Control and Prevention has more on high blood pressure during pregnancy. 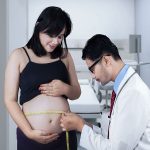