1 in 5 Young Women Who Tan Indoors Get Addicted

More than 20 percent of young white women who’ve been to a tanning salon become addicted to tanning — even though doing so raises their risk of deadly skin cancer and premature skin aging, a new study reports.

These women seem to depend on tanning to feel attractive and often show symptoms of depression, the researchers said.

“Our study indicates a substantial proportion of young women who indoor tan may become dependent, putting this group at especially high risk for skin cancer later in life,” he said.

The researchers found that as beliefs about the importance of appearance grew stronger, young women were 73 percent more likely to be addicted to indoor tanning.

In addition, women who were depressed were nearly four times more likely to have a tanning addiction, compared with women who weren’t depressed, Mays said.

It’s not yet clear why some women become addicted to tanning. Some scientists believe that tanning produces a by-product that has an opioid drug-like effect on some people.

Joseph Levy is scientific adviser to the American Suntanning Association, which represents the tanning salon industry. He disagreed that tanning can be addictive.

“It is imprudent to characterize our natural and intended attraction to sunlight as addictive,” he said. “Ultraviolet exposure is a natural attraction, and humans get less regular sunlight today than at any point in human history.”

At least one medical specialist disagreed with Levy. Dr. Doris Day, a dermatologist at Lenox Hill Hospital in New York City, said she sees women who are addicted to tanning every day.

“Tanning is not safe and it’s not healthy,” she said. Day tells women who are addicted to tanning about the risk for skin cancer and premature skin aging.

In addition, she helps them reduce their need to tan and gradually reduce the amount they tan.

Day advises using sunscreen, and if you absolutely need to have that suntanned look, to use a bronzer instead.

“I tell them to perfect their pale or go with their own glow,” she said.

Mays and his colleagues studied tanning addiction among nearly 400 white women between 18 and 30 years old. White women were chosen for the study because they’re the ones most likely to use indoor tanning.

The participants completed online questionnaires and had used an indoor tanning device one or more times in the past year. Nearly 47 percent of the women were college students.

The researchers measured tanning dependence based on two questionnaires. The participants were considered tanning-dependent if they tested positive for addictive behavior on both questionnaires.

In total, nearly 23 percent of the women tested positive for indoor tanning dependence, the researchers found.

Women who were dependent were more likely to have begun tanning at an earlier age, to be concerned about their appearance and to have depressive symptoms, compared with women who weren’t dependent, Mays said.

He said women need to understand not only the risks of tanning but to be on the lookout for signs of tanning addiction, such as symptoms of depression.

However, getting people to change this behavior may be tough, he added.

“We do not yet have resources available to help young women who may be tanning-dependent to change their behavior to reduce their risk,” Mays said.

The report was published Oct. 19 in the journal Cancer Epidemiology, Biomarkers & Prevention.

For more on skin cancer, visit the American Cancer Society. 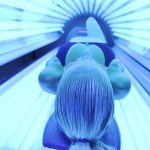