Your Gas Stove Might Make You (and the Planet) Sick

That gas stove in your kitchen fires up quickly and cooks evenly. What’s not to love?

The emissions from gas stoves are considered major contributors to climate change and damaging to human health. Now, new research suggests they’re troublesome even when they’re turned off.

The problem is sizable: Over 40 million U.S. households cook with gas, and gas stoves directly expose people to harmful emissions that often include formaldehyde, carbon monoxide and nitric oxides (NOx) that can trigger asthma, coughing, wheezing and difficulty breathing, the researchers said.

“I think one of the take-home messages for the paper is that natural gas appliances, they heat the Earth and they harm the planet, and they’re also impacting the air quality that we breathe,” said senior study author Rob Jackson, a professor of Earth system science at Stanford University in California.

“Consequently, electrification could cool the planet and make our air cleaner and make us healthier,” Jackson added.

To come to that conclusion, his team measured methane and NOx released in 53 California homes during combustion, ignition and extinguishment, along with when the appliances were off.

The stoves that were a part of the study ranged from three years old to 30 years old. They were from 18 different brands. But age or cost of the stove didn’t seem to matter.

These household appliances emitted an estimated 1.3% of the gas they use as unburned methane, the study found. That was substantially more than the emissions reported by the U.S. Environmental Protection Agency for all residential sources combined, according to the researchers.

About three-quarters of all the methane emissions recorded in the study happened while stoves were off, possibly because of loose fittings and connections to the stove and the in-home gas lines.

Methane wasn’t the only emission: NOx, including nitrogen dioxide (NO2), was also released.

“There are no current indoor standards for NO2. We wanted to measure the rates of emissions of these pollutants inside homes to see how quickly they are generated by stoves, to see how quickly the concentrations would build up in a home, over time, depending on the ventilation and the size of the kitchen,” said study lead author Eric Lebel. He was a graduate student in Stanford’s School of Earth, Energy and Environmental Sciences at the time of the research and is now a senior scientist for PSE Healthy Energy in Oakland, Calif.

“In some instances, we found that it exceeded the [outdoor] one-hour standard in just a matter of minutes,” Lebel said. This was especially true in smaller kitchens, in homes with poor ventilation and where people were not using the range hoods.

These appliances warm the planet both by generating carbon dioxide when burning natural gas and by leaking unburned methane, according to the report, which noted that the impact from natural gas-burning stoves in the United States has a climate equivalent to the carbon dioxide emissions from over 500,000 gasoline-powered cars.

The paper is the second published by these researchers looking at the impact of natural gas emissions from household appliances. The previous study, published in 2020, looked at the difference in emissions between tankless and storage water heaters.

“This was a natural next step,” Lebel said. “Stoves are one of the biggest three appliance users of gas in residential homes. Furnaces and water heaters are number one and two, depending on where you live.”

Methane’s global warming potential is about 86 times greater over 20 years and 25 times greater a century after its release than carbon dioxide is, according to the study authors. While there is more carbon dioxide in the atmosphere, methane’s relative concentration has grown twice as fast since the start of the Industrial Revolution.

Jackson said, “Anytime we’re replacing an appliance, it should be electric. Period.”

The findings were published Jan. 27 in the journal Environmental Science & Technology.

“This is definitely an important and emerging area of concern for both public health and for climate change,” said Katherine Pruitt, national senior director for policy at the American Lung Association.

Having a better understanding of where methane actually is being emitted is really important, she said.

“I think one of the most significant findings in this study was the contribution to methane emissions from the stove, even when they’re not on,” Pruitt said.

Nitrogen dioxide is a respiratory irritant, Pruitt noted. It can make it more difficult to breathe, can exacerbate asthma in people who have the condition and there is some evidence that it may actually cause asthma in young children. It has also been linked to cardiovascular harm, low birth weight and premature death.

Pruitt offered some practical suggestions for homeowners with gas appliances, including having them serviced to make sure they’re working properly and using kitchen hoods that are ventilating and not just recirculating the air.

Everyone has the right to a safe and healthy indoor environment in their homes, Pruitt said.

“That’s really been a tenet of our lung health position for many years,” she said. “And like any public health protection, it’s a combination of educating the public about the steps that they can take to protect themselves and making sure that we have the policies in place to protect the population.”

The U.S. Environmental Protection Agency has an overview of greenhouse gases. 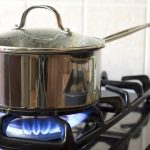