It’s no secret that too much social media can be bad for one’s mental health. Now, research suggests that taking even a brief break from TikTok, Facebook, Instagram and Twitter can ease symptoms of depression and anxiety.

Staying off social media for a week meant, for some study participants, gaining about nine hours of free time, which improved their well-being, British researchers report.

“If you’re feeling like you use too much social media and this is negatively impacting your mental health, then taking a break may be worth a try and give you at least some short-term improvements,” said study author Jeff Lambert, an assistant professor of health psychology at the University of Bath.

These findings could have implications for how people manage their mental health, offering another option for people to try, Lambert said. “However, further research is needed to examine longer-term effects and whether it is suitable in a clinical context,” he added.

For the study, the researchers randomly selected 154 people ages 18 to 72 who used social media every day, instructing them to either stop using all social media for a week or continue using it as usual. People in the study spent an average of eight hours a week on social media.

Those who took a break from social media had significant improvements in well-being, depression and anxiety, compared with those who continued to use social media, the study found.

Those who took the week-long break used social media an average of 21 minutes, compared with about seven hours among those who didn’t, Lambert said.

The findings were published recently in the journal Cyberpsychology, Behavior and Social Networking.

Dr. Scott Krakower, a psychiatrist at Zucker Hillside Hospital in New York City, thinks that for some people, social media can result in feelings of depression and anxiety as they compare themselves to others on these sites.

“They may feel inadequate because they’re not like those people that they’re interacting with,” he said. “You know nothing about them, yet you still know a lot of information and you may feel like you’re being excluded because of some of the things that other person is doing so that evokes feelings of inadequacy and lowers self-esteem.”

Krakower doesn’t think abandoning social media altogether is necessarily the best strategy for people who experience negative feelings. It’s better, he believes, to develop a plan to manage social media use, which might involve going to these sites less or taking regular short breaks.

“I think if you have a suspicion that the depression [and] anxiety is coming from being online or you’re getting upset by looking at things you notice in social media, and it’s getting in the way of your functioning, then I think you need to take a little break, even if it’s a day or two days, and see how you do without it,” Krakower said.

“I don’t think you have to be off completely unless you feel like you’re completely addicted to it, but I think you need to monitor it,” Krakower said.

Another expert said that staying off social media is not the answer, rather it’s learning how to use these sites in healthy ways.

“While abstention may indeed improve well-being, it may not be realistic, feasible or even advisable long-term,” said Melissa Hunt, associate director of clinical training in the Department of Psychology at the University of Pennsylvania.

“Ultimately, our goal needs to be focused on harm-reduction with these platforms, not abstention,” she said. “These platforms have become an important part of daily life for most people under the age of 30. The real challenge is to help people use the platforms mindfully and adaptively.”

McLean Hospital has more on social media and mental health. 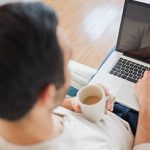