That’s how many lives could be saved in 154 of the world’s largest cities through immediate action to reduce emissions and limit the global temperature increase to 2.7 degrees Fahrenheit, instead of delaying the largest reductions, as some countries propose, the researchers said.

Taking action sooner rather than later would reduce premature death on all continents, with the biggest impact in Africa and Asia, computer simulations show, according to the researchers.

The new study shows the high cost to human life if nations take the lowest-cost approach to reducing emissions, according to study author Drew Shindell.

Shindell is a professor of earth sciences at Duke University’s Nicholas School of the Environment, in Durham, N.C.

In the lowest-cost approach, fossil fuel emissions would stay higher in the short-term in the hope they could be offset by future reductions.

“The lowest-cost approach only looks at how much it will cost to transform the energy sector. It ignores the human cost of more than 150 million lost lives, or the fact that slashing emissions in the near term will reduce long-term climate risk and avoid the need to rely on future carbon dioxide removal,” Shindell said in a university news release.

“That’s a very risky strategy, like buying something on credit and assuming you’ll someday have a big enough income to pay it all back,” he said.

Scientists have lots of historical data on air pollution and can project with “relatively high certainty” how many people would die in a given city under each scenario, Shindell said.

Los Angeles and New York are among six cities that could avoid as many as 320,000 premature deaths if international governments reduce carbon and other emissions now, he said.

“Hopefully, this information will help policymakers and the public grasp the benefits of accelerating carbon reductions in the near term, in a way that really hits home,” Shindell said.

The report was published in the March 19 issue of the journal Nature Climate Change. Funding for the study came from NASA’s Goddard Institute for Space Studies.

NASA has more on climate change. 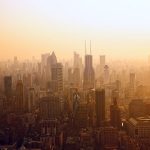