After decades of progress, the United States has seen a slowdown in reductions of two major air pollutants, a new study finds.

Researchers found that levels of nitrogen oxides and carbon monoxide — which contribute to the formation of ozone pollution and smog — have not continued the fairly steady decline predicted by the U.S. Environmental Protection Agency.

The study also found that carbon monoxide levels have declined much more slowly in recent years.

The findings were unexpected and suggest that it may be more difficult than believed to achieve the stated goal for lowering ozone pollution, according to the study authors.

“Although our air is healthier than it used to be in the 1980s and ’90s, air quality in the U.S. is not progressing as quickly as we thought,” said study co-author Helen Worden, a scientist at the National Center for Atmospheric Research (NCAR). “The gains are starting to slow down.”

“We were surprised by the discrepancy between the estimates of emissions and the actual measurements of pollutants in the atmosphere,” study lead author Zhe Jiang said a news release from the center.

“These results show that meeting future air quality standards for ozone pollution will be more challenging than previously thought,” added Jiang, who conducted much of the study during a postdoctoral fellowship at NCAR, and is now with the University of Science and Technology of China.

The study was published May 1 in the Proceedings of the National Academy of Sciences.

The National Resources Defense Council has more on air pollution. 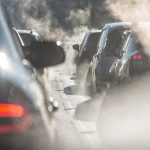