A tool used to restore forest ecosystems could also be key to the battle against tick-borne disease, researchers say.

A recent study suggests it could also reduce tick populations and transmission of diseases that have proliferated since the early 1900s when fire suppression created forest habitats that favored survival and spread of ticks.

“Before the arrival of Europeans, Eastern forests were ‘fire-dependent,’ characterized by fire-tolerant species such as pine, oak and chestnut,” said lead study author Michael Gallagher, a research ecologist with the U.S. Department of Agriculture Forest Service in New Lisbon, N.J.

“Frequent low-to-moderate intensity fires would have fostered dry conditions, thinned the understory and diminished layers of leaf litter, which in turn would have created microclimates with lower humidity and higher temperatures,” Gallagher explained.

These conditions were likely to limit ticks’ population activity and interaction with hosts, he said. But fire suppression after deforestation enabled species that thrive in moister conditions to become dominate. The result is called mesophication, and it has been widely seen throughout the eastern United States.

“In the absence of fire, these mesic habitats moderate forest temperatures and humidity, promote denser understory growth, and cause greater moisture retention in forest litter,” Gallagher said. “This creates microclimates within the ideal range for tick survival and optimizes conditions for ticks to ‘quest,’ or seek hosts.”

As many as 60,000 cases of tick-borne disease are found in the United States each year, the researchers said. That’s more than 75% of illnesses spread by insect bites. Tick-borne pathogens cause Lyme disease, anaplasmosis, ehrlichiosis, Powassan disease, Rocky Mountain spotted fever, tularemia and other illnesses.

Fire not only kills ticks, it also helps promote conditions that make it hard for any that remain to thrive.

“Reductions in canopy and understory density and the creation of gap space from prescribed burning can increase sun exposure and wind speed and reduce evapotranspiration from plants, promoting hotter and drier conditions during the daytime and colder temperatures at night,” Machtinger said. “These more frequent moisture and temperature extremes can exceed tick tolerances and affect behavior, development time, molting and overall survival.”

Thinner layers of leaf litter due to burning could reduce insulation and lower the temperature of soils where ticks overwinter, causing higher death rates, she added.

These conditions can also be helpful to some predators of ticks, such as red imported fire ants and bobwhite quail.

“On the other hand, reduced woody plant density and debris as a result of fire actually may decrease populations of some small mammal hosts of ticks by removing cover and making them more vulnerable to predation,” Machtinger said. “This would reduce ticks’ interaction with hosts that serve as reservoirs of disease pathogens.”

Gallagher said, “We believe there’s an opportunity to reduce the number of ticks by using prescribed fire to restore the health of forest ecosystems, and we think this approach can be integrated as part of a multipronged strategy for managing ticks and tick-borne diseases.”

The findings were recently published in Ecological Applications.

The U.S. Centers for Disease Control and Prevention has more on tick-borne disease. 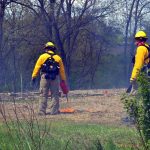