Many American teens are sleep-deprived, and parents blame their attachment to electronics, new survey results show.

Researchers at the University of Michigan conducted a national poll of more than 1,000 parents with at least one child between 13 and 18 years old.

“This poll suggests that sleep problems are common among teens and parents believe late-night use of electronics are a main contributor,” said poll co-director Sarah Clark.

“Teens’ hectic schedules and homework load, as well as anxiety about school performance and peer relationships, also are seen by parents as contributing to sleep problems,” she said in a university news release.

Forty-three percent of the parents said their teen had trouble falling asleep or tossed and turned during the night.

And 56 percent of these parents said that electronics, particularly cellphones and social media, were robbing their teenagers of sleep, the C.S. Mott Children’s Hospital National Poll on Children’s Health showed.

In addition, 10 percent of parents reported that a health condition or medication had a negative effect on their child’s sleep habits.

Many parents reported trying to encourage better sleep. More than half said they suggest limiting caffeine intake in the evening or tell their teen to turn off their phones and other electronic devices at bedtime. More than 40 percent recommend a snack before bed, 36 percent tried natural sleep remedies like melatonin, and 28 percent said their teen has tried a sleep aid.

But only 4 in 10 parents with sleep-deprived teens said they talked to a doctor about it.

Those who did bring up the matter with a doctor said they were generally advised to turn off electronics and phones at bedtime, stick to a regular sleep schedule and limit caffeine. Some physicians also suggested trying a natural sleep remedy.

“Parents whose teens continue to have frequent sleep problems … may want to talk with a health care provider, particularly when considering which type of medication to try,” Clark said. “Inadequate or disrupted sleep can have long-lasting health effects that go beyond moodiness and irritability for teens.”

These include difficulty concentrating in school and an increased risk of auto accidents, Clark said. “Inadequate sleep has also been linked to health problems ranging from obesity to depression,” she added.

The American Sleep Association has other information on sleep and electronics. 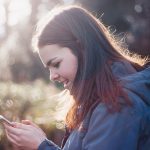