Every town wants low crime rates. But a new finding may offer a whole new reason to advocate for the change: Falling crime rates may lower heart disease fatalities.

An analysis of 2000-2014 data from Chicago illustrated a significant decline in violent crime. Across the city, the drop in total crime was 16%, while simultaneously there was a 13% decrease in heart disease deaths.

“It’s important to acknowledge the impact of the built environment on health,” said the study’s lead author, Dr. Lauren Eberly, a clinical fellow in cardiovascular medicine and associate fellow of the University of Pennsylvania.

“Exposure to violent crime appears to be an important social determinant of cardiovascular health within the broader context of the ways in which structural racism harms health,” she said in a university news release.

“Because community areas that experienced the smallest decline in crime also experienced the smallest improvements in cardiovascular mortality, pre-existing disparities in mortality between neighborhoods in the city are likely to worsen over time, especially with the recent rise in crime rates in the United States,” Eberly said. “While these results represent one large, urban U.S. city that could potentially not be generalizable to other cities, we suspect that these results are likely reflective of many other large urban cities across the country.”

The dataset used was the most recent one available, but since then, violent crime has increased in the United States. Eberly said it was possible that the increases are also leading to increases in heart-related deaths, but statistics aren’t available to back that up.

Research has shown that high crime rates disproportionately affect areas where people of color live, suggesting that the study’s findings have strong significance regarding the long-term health prospects of people in these neighborhoods.

“We hope that, given these results, people will consider the root causes of violence,” Eberly said. “We must acknowledge the legacy of racist policies and practices that have led to concentrated disadvantage and crime in Black and other racially and ethnically minoritized neighborhoods. Policies must be implemented to address the health consequences of structural racism and racial segregation.”

The study was published online July 14 in the Journal of the American Heart Association.

The U.S. Department of Health and Human Services has tips for keeping your heart healthy.

Was this page helpful? 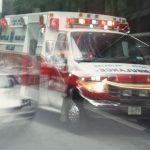