Natalie Dormer: “GOT is Realistic, Not Misogynistic” That moment when you realize it sucks being a lady in Westeros.

AFTER THE CLIFFHANGER TO END ALL CLIFFHANGERS, Game of Thrones is back on air, and the sixth season has officially gripped the attention of the television-watching community. There are so many pressing questions to have answered! Will Arya Stark regain her eyesight? Who will resurrect Jon Snow, if not Melisandre? How many women this season are going to end up getting raped, murdered, or both? Season Five of the hit HBO drama series received a lot of criticism at the end of its 2015 for its depictions of female characters and the violence they received at the hands of their co-stars. Many viewers and industry professionals alike denounced the show for being needlessly misogynistic when it came to the treatment of its female leads. Natalie Dormer, who plays Margaery Tyrell on Game of Thrones, for one doesn’t think that the showrunners deserved the criticism that was sent their way; she defends the show’s narrative, insisting that the harrowing scenes are true to life and that they reflect the horror of human nature.

“All I know is that I turn on the news, and it’s covering a boy drowning off the coast, or children being shown beheading videos,” she explained to British newspaper The Sunday Times‘ Culture magazine in February. “The horror of human nature is prevalent in our world, and I appreciate that some people want to turn on the telly (television) for escapism – but if that’s what you want, don’t watch Game of Thrones.”

She continues: “I choose fantasy to vent, to process complex political, sexual, and social politics at the safe distance of fiction. For me, that’s what art should be.”

Dormer concedes there are “some misogynistic characters in Game of Thrones,” but their presence can help draw attention to serious issues which affect people in the real world.

She makes an interesting point when she talks about the capacity of television to initiate dialogue, saying she appreciates “the fact it can start a conversation about the statistics of rape and how much it happens within the family…” Dormer adds: “I’m not saying it’s OK… I find parts of the show difficult to watch, but I don’t think we do young people any favours by sheltering them.”

If Dormer does have any reservations about her character or a particular scene, there’s nothing she could do about it even if she wanted to.

“You sign on the dotted line, give them seven years and don’t get to alter the writing,” she explains. “I can’t, as Natalie, defend everything Margaery does, as that’s not my job.”

Her GOT co-star Jack Gleeson, who played the positively-chilling nutjob Joffrey Baratheon, also defended the show earlier in 2015, telling The Daily Beast: “It’s a tricky thing when you are representing misogyny in that way, because I wouldn’t say the show ever implicitly condones misogyny or any kind of violence towards women.” Gleeson continues, saying “but, perhaps, it’s still unfair or unjust to represent it even if the gloss on the representation is a negative one.” 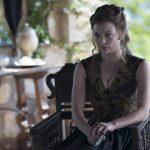