Many parents of preschoolers insist that naps are essential to recharge their little ones during the day and improve their mood.

New research by scholars in Australia and England suggests that naps help preschoolers map letters to sounds, a key to reading success later on.

“I think we provided some initial evidence, but also combining with the literature and other studies looking at similar things, we can say that nap does seem to help with learning,” said study author Hua-Chen Wang, a lecturer at the Macquarie University Center for Reading in Sydney.

The new study included 32 children ages 3 to 5 from two Sydney day care centers. Though the tots napped regularly, they weren’t getting formal teaching of letter names or sounds through the centers.

During seven sessions over two to four weeks, children were tested to establish their letter-sound knowledge, then provided formal training both with and without naps.

The testing included letter-sound mapping and questions such as: “Which sound does the letter C make?”

Kids who napped did better when asked to identify unfamiliar words containing sounds they had learned. But napping did not appear to affect explicit learning, such as producing or recognizing letter sounds they hadn’t learned earlier.

She noted that parents often tell researchers that their child seems to have learned a new reading skill, but then doesn’t remember it the next time they try to use it. This new study looked at both reading and memory.

The study builds on evidence that overnight sleep helps memory consolidation in adults. One theory holds that when people learn something new, the information is encoded and stored temporarily in the brain. Over time, this memory consolidates and becomes part of a person’s long-term memory, Wang said. Sleep helps that transition happen.

Because the study sessions happened at the day care center, researchers did not track physiological sleep measures, such as rapid eye movement.

Learning letter-sound mapping starts at birth with exposure to words through sounds that infants hear from those around them, said Dr. Dipesh Navsaria, a spokesman for the American Academy of Pediatrics who reviewed the findings.

If kids are exposed to printed words through books or in the environment, such as at the grocery store, they connect printed letters and sounds around 3 years of age, he said.

“This is actually a watershed moment in the development of literacy because when children suddenly recognize that, then it pushes them into a different direction of starting to connect these sounds with print and to start doing that challenging work of decoding text and becoming fluent at it over the coming years,” said Navsaria, an associate professor of pediatrics, human development and family studies at the University of Wisconsin-Madison.

Previous data on the importance of sleep for memory and skill consolidation is why, for example, experts urge college students not to pull all-nighters, he said.

Early exposure to words through books not only has benefits for literacy, but also in building bonds as parents and children interact, Navsaria said.

Researcher Wang said preschools could potentially use the new findings when scheduling classroom activities. When teachers have new information to impart, they could plan to do so close to children’s nap time, when it might have the biggest benefit.

The findings were published March 29 in Child Development.

The U.S. Department of Education has reading resources for parents. 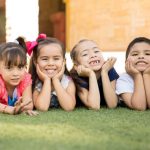