Could America’s roads become safer in the future?

A new online survey involving just over 1,400 participants showed that a growing number of American teens are getting their driver’s license before age 18, which means more of them are learning to drive under supervised conditions.

The AAA Foundation for Traffic Safety study released Oct. 21 surveyed teens and young adults aged 18 to 24 to determine when they got their license. The questionnaire was administered over this past summer.

“The trend for teens to acquire their driver’s license has changed over the past 10 years,” said David Yang, executive director of the AAA Foundation for Traffic Safety.

“Many are getting licensed before the age of 18, which means more of Generation Z is learning to drive under the protection of state graduated-driver licensing programs and parental supervision,” Yang added in a foundation news release.

In 2012, the United States was just emerging from a recession and many young people said they’d delayed getting their license because their family couldn’t afford the high cost of having an additional driver, the researchers noted.

The new study also found that nearly two-thirds of respondents in less urbanized areas got their license before age 18, compared with nearly half of teens in large cities.

“The fact that more teens are starting to drive at an age when they can gradually learn the necessary skills to be safe behind the wheel is great news for all drivers,” said Jennifer Ryan, AAA director of state relations.

“Past trends of waiting until you turn 18 to be licensed was a cause for concern. Many of these young drivers were getting behind the wheel with minimal knowledge or support, putting themselves and others at risk,” Ryan explained.

Previous AAA Foundation research found that for every mile driven, new teen drivers aged 16 to 17 are three times more likely than adults to be involved in a deadly crash. 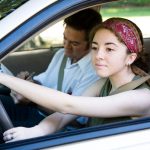