I BELIEVE THE WORLD WOULD BE A BETTER, MORE PEACEFUL PLACE WITH MORE WOMEN IN POSITIONS OF POWER.

That being said, I don’t believe that just anywoman should win the presidency simply because she is a woman. Viewing the terrifying speed with which Donald Trump has fomented racist, sexist fervor and built up a dedicated following, we are reminded that this election cannot be about shallow ideals or entitlements. Instead, it needs to be an opportunity to examine the principles each candidate stands for, and elect someone who has values most lined with our own while we exercise our right to vote, a right women had to fight tooth and nail to win less than 100 years ago. We can’t let celebrity or star-power influence our decisions, even if these celebrity candidates have a long and powerful reach, even if other celebrities and stars give them their official endorsements. It’s the most irresponsible thing we could do within the “democratic” model of government we still consider ourselves to uphold here in the States.

So, what do Ellen DeGeneres, Lena Dunham, Ariana Grande, Amy Schumer, Kim Kardashian, and even Beyoncé all have in common? They’ve all publicly endorsed Hillary Clinton. What else do they have in common? Unfortunately, they haven’t said very much about why they are endorsing her other than something along the lines of: “It’s about time we have a woman in the White House.”

In October of 2015, Lena Dunham interviewed Hillary Clinton for her weekly newsletter Lenny Letter. I was excited for the interview because I thought Dunham might take the opportunity to use her envelope-pushing point-of-view to ask some tough questions that we would not hear or see asked of Clinton on any major news network. Instead, Dunham’s published interview consisted of what it was like for Clinton as a young female collegiate finding her footing in the political arena; what it was like meeting and marrying while trying to keep her identity in the process; and, of course, a look-back on some of Clinton’s fashion choices. In fact, Dunham says directly: “We’re all very curious at Lenny about what your passions outside of the political area are.”

Well, I read Lenny. I love Lenny. I consider myself a “Lenny Lady.” You know what I really just don’t care about right now? What Clinton’s passions outside of politics are. You know what I do care about? Why the former Secretary of State voted against equal rights for gay people in her earlier political career but changed her mind when it became more politically-acceptable to be inclusive, especially since she considers herself “someone who believes in equal rights.” And fine, OK. So maybe she just means equal rights between heterosexual men and women only, without factoring race or LGBT rights. (Still not okay at all, but workable for the sake of context?) If that’s her definition of feminism, then why does she accept donations to the Clinton Foundation from Saudi Arabia, a country that actively denies women equal rights? Does it have something to do with the fact that she once, as Secretary of State, approved Boeing to gift $29 billion dollars’ worth of fighter jets to Saudi Arabia?

If Clinton’s wishy-washiness comes off as oily, it probably has to do with the fact that’s she so invested in it. Oil, that is. The writing’s on the wall about how Clinton really feels about the use of fossil fuels and converting our dependency on oil to environmentally-safe energy like solar and wind power. Both her presidential campaigns have accepted hundreds of thousands of dollars from oil company employees — $160,000 this campaign alone. Taking into consideration the egregious human rights concerns that both Saudi Arabia’s treatment of its female citizens and the fossil fuel industry’s continued destruction of the environment raise, I’m not really sure how accepting donations from either fits in with her new platform of promoting “love and kindness.”

Further along in the interview, Dunham (finally) starts to ask more important questions, like: “What will you do to work on [the] terrible fracture in race relations that we’re experiencing in America right now?” Good question, LD! We’ve got some real questions heating up now, but Hillary’s on guard and gives obvious answers like: “One of the areas we have problems is the relationship between communities of color and the police forces who are to protect them.” She goes on: “… After 9/11… a lot of military equipment was sold to police departments, and those police departments began to look like a war zone, not protecting the family down the block or the neighborhood community center across town.” Why, thank you, Hillary, for pointing out what any video released of police interaction in the last two years could tell us. Hell, anyone who saw the military-grade tanks and riot gear at LA’s 2015 FYF Fest — a music festival, where all anyone wanted to do was smoke a little weed and listen to a little Kanye, for Chrissakes — could tell you that the police in this country are seriously, lethally overarmed.

Clinton later says: “It’s important that communities recognize that most of the deaths in low-income communities, communities of color, are not due to police.” OK, wait a minute, hold the phone. So what Hillary is saying here is that low-income communities and communities of color are one in the same. Let’s talk about that. Why are the two synonymous? How are you going to fix that, Hillary? Is it the lack of economic and educational opportunities afforded to people in these communities? Or is it because of our country’s weak stance on gun control? How are you going to address and change those things? We need an actual strategy, not vague buzzwords like “new laws,” “new training,” and “new resources.” Hopefully, Dunham pulls through and gets Clinton to cough up details about a plan to tackle this vital issue. Let’s see: “Our last question is by far our most important question, which is that we need to ask you about this dress.” Insert photo of a photo of Hillary in 1993 wearing a shoulder cut-out dress by “her friend,” Donna Karan.

Oh. Sorry. I forgot for a second that couture from 20 years ago is a matter of national importance. Silly me.

Listen, I know comedy writers, how they think, the marks they go for. I get the comedic timing in Dunham’s questioning, cutting something serious with something light and funny. It doesn’t even come close to being an acceptable excuse. Honestly, as a fan of Dunham’s, who continues to be a major influence on the female millennial with a platform that young women are primed to listen to, I feel like she squandered a once-in-a-lifetime chance. Instead of taking this incredible opportunity to interview the first major female contender to be leader of the Free World, to get real answers to hard questions that young female voters should care about, she focused on making Hillary just another girlfriend. I’m not interested in voting for a friend, and I don’t think any Lenny Letter Ladies are, either.

In fact, it’s a little insulting that we, as young women, are presumed to still act as if we are in high school, where it’s appropriately immature to just vote for our friends. Hillary Clinton isn’t my friend — she’s a political figure. What’s special about her is that she’s created an immensely successful political career for herself, one that’s given her a fighting chance to actually be the first female President of the United States. Yet, for some reason, the celebrities who endorse her, like Lena Dunham, don’t seem to very interested in bringing her real issues to the table. They prefer to focus on the fact that she’s a woman. And really, how feminist is that?

I guess if you’re lucky enough to live in the safe world of privilege that stardom opens up to you, where the outcomes of presidential elections won’t really have any effect on your existence, you don’t have to worry about anything more important than couture dresses. The average millennial female voter, on the other hand, expects more than that. She deserves more than that. 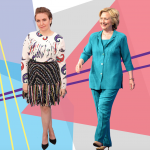