Lena Dunham Is Ready for the Nudity Questions to End LENA DUNHAM will not miss the constant questions about her weight and willingness to strip off on camera once Girls finishes.

The writer/director has been starring as Hannah Horvath in the TV comedy she helms since 2012, but has decided that it will end after its sixth season in 2017 because she felt it was time to wrap up the story.

Lena admits one aspect she will not miss after Girls ends is the questions about her onscreen nudity and weight she regularly has to field during promotion.

“Honestly, it’s been four-and-a-half years of constant questions about why do you feel the need to do this, do you feel embarrassed, what’s important about it,” she tells Britain’s The Independent newspaper. “After you’ve answered five of those questions you’ve kinda answered them all. Plus, after a certain point you just feel can’t we all get used to this?

“My being naked as Hannah is not that shocking, and so much of it is to do with being a woman who doesn’t have an ideal Hollywood body type. At the end of the day we all have bodies and to pretend we don’t is just insane. It makes me miss the films of the ’70s where there’s just casual nudity, and a casual understanding that the human body is a part of the human experience.”

She also hopes that after Girls she can have more of a balance between her professional and personal life. Despite the show only airing for 10 to 12 weeks each year, Dunham works on all aspects of the Girls production — which means the job never stops.

“The thing really is that the job is non-stop and I’ve been doing it for five years,” she sighed. “When I’m not shooting I’m writing, and when I’m not writing I’m editing, and when I’m not editing I’m doing press. And I love all that but it will also be exciting to chill out a little bit. Frankly, so much of my 20s were devoted to my work… it’s not like I’m planning on taking a two-year vacation, but definitely shifting the pace of my life a little is really exciting.”

Dunham hopes to focus on writing and directing more than acting after the Girls era ends, and is excited by the idea that she could once again be anonymous. She adds: “I literally think that six months after a TV show ends no one will recognise you in a grocery store. And actually that’s fine. I’m great with that.” (HW/WNBIN/CM-DHB) 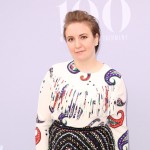