While U.S. policymakers have attempted to lower lead exposure among children since the 1970s, new research finds that kids living near airports are still being exposed to dangerous levels of the heavy metal.

“Across an ensemble of tests, we find consistent evidence that the blood lead levels of children residing near the airport are pushed upward by the deposition of leaded aviation gasoline,” said study author Sammy Zahran, associate chair of economics at Colorado State University in Fort Collins.

“This indicates we should support policy efforts to limit aviation lead emissions to safeguard the welfare of at-risk children,” Zahran said.

When analyzing the blood lead levels of children under the age of 6 from 2011 to 2020, the researchers discovered that the closer a child lived to the Reid-Hillview Airport in Santa Clara County, Calif., the more likely that child had a blood lead level that exceeded California’s safety threshold. That safety threshold is 4.5 micrograms per deciliter.

The report was published online Jan. 10 in PNAS Nexus.

Leaded gasoline is still a standard part of aviation gasoline. It is used by an estimated 170,000 piston-engine aircraft nationwide, accounting for as much as two-thirds of lead emissions in the United States, the researchers said in a journal news release.

This is true even as efforts to remove lead from paint, plumbing, food cans and automotive gasoline have led to the decline in blood lead levels of American children over several decades. The most effective of these policies has been the phase-out of lead from automobile gasoline under the Clean Air Act of 1970, according to the study authors.

Children living downwind of the airport were about 2.2 times more likely to have a blood lead level above the threshold of concern.

Blood lead levels of children residing within a half mile of the airport were especially vulnerable to an increase in piston-engine aircraft traffic, the investigators found.

The U.S. Centers for Disease Control and Prevention has more on blood lead levels in children. 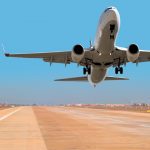