Social media’s impact on young people is a hot topic, with most kids and teens wanting to do whatever their friends are doing and parents worrying about setting limits.

A new study examines whether frequent checking of social media sites (Facebook, Instagram and Snapchat) is associated with changes in functional brain development in these early adolescents, about age 12.

Using brain scans called functional magnetic resonance imaging (fMRI), researchers at University of North Carolina at Chapel Hill found that habitually refreshing and checking social media may be associated with changes in brain sensitivity to social rewards and punishments — those online likes and engagement from others.

“We know that adolescence is one of the most important periods for brain development — it’s going through more changes in reorganization second only to that we see in early infancy,” said study author Eva Telzer, who is an associate professor of psychology and neuroscience. “It’s a really dramatic period of brain development, in particular in these brain regions that respond to social rewards.”

Social rewards aren’t limited to social media sites. They can be positive face-to-face feedback from peers or even receiving money.

Other research has found that some adolescents are on their cellphones almost constantly, checking their social media at least hourly.

For the three-year study, Telzer’s team recruited 169 sixth- and seventh-graders from three public middle schools in rural North Carolina. Participants were racially diverse and included both boys and girls.

The participants reported how often they checked the three social media platforms, varying from less than once a day to more than 20 times. The researchers used this information to make a scale.

Then participants underwent fMRI brain scans. During these scans, they would see a cue that social feedback would be a reward, a punishment or neutral. They then had to quickly push a button when a target appeared. The teens would then get a social reward or punishment.

Participants who at age 12 were checking social media upwards of 15 times a day showed “differences in the way that their brains develop over the following three years,” Telzer said. “And it’s in specific brain regions that are detecting the salience of the environment, responding to those social rewards.” Salience refers to which elements people are most drawn to and will focus their attention on.

Telzer said this suggests that teens who grow up constantly checking their social media are becoming hypersensitive to peer feedback.

“Their brains are responding more and more and more over those years to that social reward feedback that they are anticipating,” Telzer said.

What isn’t clear is what this means for their future.

It could potentially lead the brain to become more and more sensitive to social feedback and this could continue into adulthood, Telzer said.

But researchers haven’t tried to see if they can change this trajectory.

While the brain changes might promote compulsive or addictive social media behaviors, they may also reflect an adaptation that helps teens navigate their increasingly digital world.

“We don’t know if this is good or bad — if the brain is adapting in a way that allows teens to navigate and respond to the world they live in, it could be a very good thing,” Telzer said. “If it is becoming compulsive and addictive and taking away from their ability to engage in their social world, it could potentially be maladaptive.”

She said parents can help their teens by fostering activities that bring joy without going online — for instance, sports, art or volunteering.

“It’s a thought-provoking associational study,” said Dr. Kevin Staley, neurologist and chief of pediatric neurology service at Massachusetts General Hospital in Boston, who reviewed the findings. “We’re all worried that compulsive use of social media is going to alter development in adolescence.”

More research would be required to know for sure that social media changes adolescent brains, he said. For example, researchers might see what happens if they take away kids’ phones for six months to prevent frequent social media checks.

Staley added that fMRI is an intriguing window into the brain, but still crude given the complexity of brain circuitry.

“There’s a lot of different things those circuits could be doing, and we don’t have a window into what they’re doing,” he said.

Yet, parents want to know the impact that social media will have on their kids and whether they should limit it, Staley noted.

“This study is really sort of an early stepping stone to the evidentiary path that would give us reason to act one way or the other,” he said, adding that it is too early to make a recommendation based on these findings.

For now, parents will need to use common sense about social media.

“I think it reinforces how many things are changing during early adolescence,” Staley said. “We all tend to suppress all the angst that we underwent during that period, but there was a reason that it was hard, because your brain changes in radical ways preparing for adulthood. And this study shows that this is something that could be physically measured.”

The findings were published online Jan. 3 in JAMA Pediatrics.

Pew Research has more on teens and social media. 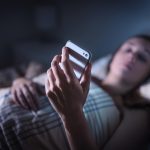