For Drivers, Hands-free Can Still Be a Handful

With many states having laws about not using handheld cellphones while driving, it’s no wonder that 75 percent of drivers think that hands-free technology is safe to use.

But according to the AAA Foundation for Traffic Safety, the complex voice-activated systems found in more and more new cars can distract you even more than talking on your cell.

Done in conjunction with the University of Utah, the researchers looked at systems built into cars from six different automakers, with functions ranging from changing radio stations to posting messages on social media.

Results showed that the more advanced the command — such as sending texts or posting to Facebook — the higher and potentially more dangerous the level of distraction. You might not think of texting as mentally challenging, but it can be, especially if you look down at your phone to see if the text was correctly spelled while also trying to focus on the road.

To increase driving safety, before you take your car out of park, make all needed adjustments, including tuning into your preferred radio station, so you won’t have to do any of this while you’re moving. Whether or not you have a built-in high-tech system, if you’re driving solo, put your phone on silent and place it in a compartment or your purse so you won’t be distracted by it.

Never use text messaging, email functions, video games or the Internet with a wireless device, including any built into your car, while driving, AAA says. If you don’t have a passenger with you and must make a call yourself, first pull off the road and stop your car in a safe place.

Also, talk to your kids about following these ground rules. The most restrictive laws about driving and cell phones pertain to teens.

Check out the AAA’s list of top 10 tips to avoid distracted driving. 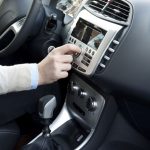