Eagles Are Being Poisoned by Environmental Lead

The national bird of the United States is facing a deadly threat from within: widespread lead poisoning, largely caused by ingesting fragments of hunters’ lead ammunition.

The poisoning is slowing the population growth of both bald eagles, the nation’s symbol since 1782, and golden eagles, whose numbers also have been dwindling.

Previous research has shown that lead is deadly to individual eagles, “but this new study is the first to show population-level consequences from lead poisoning to these majestic species at such a wide scale,” said Anne Kinsinger, associate director for ecosystems with the U.S. Geological Survey (USGS).

The study — led by scientists from the USGS, Conservation Science Global, Inc., and the U.S. Fish and Wildlife Service — analyzed samples taken from 1,210 eagles in 38 states between 2010 and 2018.

Poisoning at the levels found in the analysis is causing the birds’ annual population growth rates to slow by 3.8% in bald eagles and by 0.8% in golden eagles, according to the report published Feb. 17 in the journal Science.

“The study’s modeling shows that lead reduces the rate of population growth for both of these protected species,” said study co-author Brian Millsap, national raptor coordinator with the U.S. Fish and Wildlife Service. “That is not as impactful for bald eagles since this endemic species population is growing at 10% per year across the U.S. In contrast, the golden eagle’s population is not as stable.”

Any increase in its death rate could tip it towards a decline, Millsap added.

Nearly half of eagles studied had evidence of repeated lead exposure, the study found. Short-term exposure was more common in the winter. Both eagle species rely on dead animals as a food source year-round, but particularly during winter when live prey is harder to find, the researchers explained in a USGS news release.

Eagles typically get lead poisoning when they ingest ammunition fragments that are inside the carcass of an animal that’s been shot or in gut piles left by hunters when they dress game in the field.

The frequency of chronic lead poisoning in both eagles increases with age, because lead accumulates in their bones as they are repeatedly exposed to lead throughout their lives, the researchers said.

According to study author Todd Katzner, a USGS wildlife biologist, “This is the first study of lead poisoning of wildlife at a nationwide scale, and it demonstrates the unseen challenges facing these birds of prey.”

For more on eagles, go to Birds of North America. 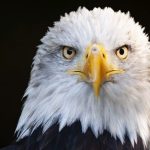