The National Safety Council has a sobering forecast for this Fourth of July.

It estimates that 18,600 people could be seriously injured on U.S. roads and 164 could be killed — nearly 4 percent more than the number of deaths (157) that occurred in 2012, the last time July 4 fell on Wednesday.

“Independence Day should be about spending time with loved ones and watching fireworks, not about dealing with the tragic aftermath of a car crash,” said council president Deborah Hersman, said in a news release.

In sharing its grim estimates, Hersman said the council hopes to highlight the importance of safe, sober and attentive driving.

During the 2016 Independence Day holiday, 41 percent of road deaths involved an alcohol-impaired driver, the highest percentage among all the major holidays, according to the council.

There are a number of ways drivers can protect themselves and their passengers: 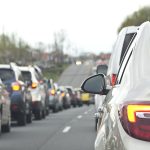