Does All That Social Media Time Harm Young Minds?

But new research suggests that the amount of time young adults spend on social media doesn’t seem to affect their risk for mental health problems.

The finding came from a study of 467 young adults who were asked about how much time each day they used social media, the importance of it in their lives and the way they used it. They also were asked about mental health issues such as social anxiety, loneliness, decreased empathy and suicidal thoughts.

The researchers found little association between the amount of time spent on social media and mental health problems. The results were published online Nov. 1 in the journal Psychiatric Quarterly.

The only area of concern was what the researchers called “vaguebooking,” which refers to social media posts that contain little actual and clear information but are worded in a way meant to trigger attention and concern in those who read the posts.

Young people who tended to write such posts were lonelier and had more suicidal thoughts than others, according to the study.

That finding suggests that “some forms of social media use may function as a ‘cry for help’ among individuals with pre-existing mental health problems,” lead author Chloe Berryman, of the University of Central Florida, said in a journal news release.

“Overall, results from this study suggest that, with the exception of vaguebooking, concerns regarding social media use may be misplaced,” she said.

“Our results are generally consistent with other studies which suggest that how people use social media is more critical than the actual time they spend online with regards to their mental health,” Berryman concluded.

The American Academy of Family Physicians has more on mental health. 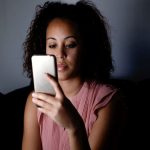