Demi Lovato Is an LGBT Ally, and Now It’s Official DEMI LOVATO is about to be showered with love by her LGBT fans at the 27th annual GLAAD Media Awards.

Lovato, who is in a serious romance with actor Wilmer Valderrama, will be honored with the coveted Vanguard Award by the world’s preeminent lesbian, gay, bisexual, and transgender media advocacy organization in Los Angeles this coming April.

And Lovato will be part of history, as this year’s GLAAD Media Awards will be televised for the first time in a decade.

Lovato, who has tirelessly spoken out in support of full acceptance for LGBT people, has publicly celebrated her late gay grandfather, who came out in the 1960s, and whose courage she cites as a driving force compelling her to “stand up for what [she believes] in.”

She gained massive popularity within the LGBT commmunity after participating in LGBT Pride celebrations in Los Angeles and New York, while her music video for “Really Don’t Care” was filmed at the L.A. Pride march.

The “Heart Attack” singer also portrayed a lesbian character on TV hit Glee, and said about the experience that she hoped to “inspire people with [her] character to love who they are and accept who they are.” Although rumors have circulated that Lovato is bisexual (based on lyrics from “Cool For The Summer”), the singer has neither affirmed nor rejected the rumors, choosing only to say: “All of my songs are based off of personal experiences. I don’t think there’s anything wrong with experimentation at all.”

Lovato has links to the GLAAD organization, having served as ambassador for Spirit Day, the group’s annual anti-bullying campaign. She took time off world tour dates to record a message for LGBT fans in Latin America, offering support and urging bullying victims to use the resources of Todo Mejora, the It Gets Better Project’s Chilean affiliate. 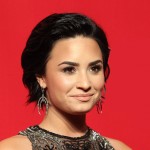