China plans to roll back some of its strict COVID-19 controls, including allowing more of its people to travel abroad.

During the pandemic, the country has limited passports, allowing them only for family emergencies or some work travel, but the government announced Tuesday that it will begin taking applications for tourism passports on Jan. 8, the Associated Press reported.

The National Immigration Administration of China will also take applications to extend, renew or reissue visas, the AP reported, noting that the agency hasn’t said when it might take applications for new visas.

As the news hit, travel companies said they experienced a surge in website searches for visa information and international ticket bookings to places, including to the United States. Other popular sites were Japan, Thailand, South Korea, Britain and Australia.

This could also lead to additional spread of the coronavirus as China is currently experiencing a COVID-19 surge, the AP reported.

Reports from cities have suggested that the ongoing COVID wave in China has infected tens and possibly hundreds of millions of people, the AP reported, and could lead to between 1 million and 2 million deaths in that country through late 2023.

Some countries, including Japan and India, have started requiring travelers from China to undergo COVID tests for the virus.

South Korea tests travelers if they have elevated temperatures, the AP reported, requiring a one-week home or hotel quarantine for anyone who tests positive. The country may build on those measures in an announcement expected Friday.

Taiwan will start testing visitors from China on Jan. 1.

The United States may begin similar measures, according to U.S. officials speaking anonymously, the AP reported.

President Xi Jinping’s government has been dropping or easing some of its strict anti-virus controls as the country deals with an economic downturn.

Some business groups have warned of foreign investments beginning to shift away from China, the AP reported.

The country also plans to “gradually resume” admitting foreign visitors, though it’s not clear when that will happen. It may not be until mid-next year while an ongoing campaign to vaccinate elderly Chinese residents continues, the AP reported.

The U.S. Centers for Disease Control and Prevention has more on COVID-19 and travel. 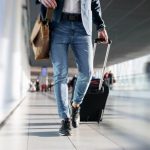