Boys tend to pay more attention in school when there are girls around, and new research suggests it’s not just about how the girls look.

The study found that young men got better reading marks in school when they were outnumbered by young women in the classroom.

Researchers reviewed the reading test scores of more than 200,000 15-year-olds. The teens came from more than 8,000 secondary schools with both boys and girls. The study found that boys did much better in schools where more than 60 percent of the students were girls.

The study was published recently in the journal School Effectiveness and School Improvement.

“Yet schools can help improve this situation by ensuring a balanced gender distribution in their student population,” she added in a journal news release.

According to the study authors, characteristics commonly associated with girls’ academic behavior — such as motivation to get good grades and strong concentration skills — may help explain their positive impact in the classroom.

The American Academy of Pediatrics offers tips for success at school. 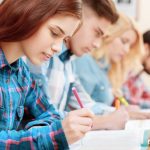