The heat is on.

Across two-thirds of the United States, over 115 million Americans live where some level of heat alert is already in effect, and 290 million will see temperatures soar past 90 degrees at some point in the next week, USA Today reported Wednesday.

As a dome of high pressure settles over much of the eastern and mid-Atlantic states, the heat indexes (the real-feel temperatures) in many places will top 100 and approach 110 degrees or higher, according to the U.S. National Weather Service.

What to do when the temperatures soar so high that heat-related illnesses start to take their toll? One expert offers some sage advice.

“Weekend athletes exercising in the heat need to remember to keep ahead of their fluids. It’s vital to stay ahead of your thirst during these heat extremes, not just to drink when you are thirsty,” said Dr. Robert Glatter, an emergency physician at Lenox Hill Hospital in New York City.

If you exercise in the heat, try to do so early in the morning when humidity and heat from direct sunlight is low.

During heat waves, seniors are at greatly increased risk for heat stroke due to their reduced ability to sweat and therefore cool their bodies. They also may be taking medications to treat blood pressure, which can reduce their ability to sweat, Glatter said.

Heat stroke is a medical emergency that requires immediate treatment. Call 911 in such cases.

Along with blood pressure medications, antihistamines and medications to treat anxiety and depression may also increase the risk for heat stroke by reducing a person’s ability to sweat, Glatter noted.

“Hypertension, coronary artery disease and kidney disease — common in the senior population — all elevate the risk for developing heat stroke, due to reduced cardiac reserve and plasticity of blood vessels. These are major risk factors for heat stroke,” he explained.

During heat waves, check on seniors to see how they’re feeling. Make sure they have access to air conditioning, plenty of cool fluids, and create a heat response plan to help reduce the risk of heat stroke, Glatter advised.

Children are also at increased risk for heat stroke because they can’t regulate their body temperature as well as adults, and they may not drink enough in hot weather.

Everyone should drink plenty of cool fluids in the heat. Water is the best choice, but low-sugar sports drinks are recommended if you’re working in the heat or exercising for more than one hour. Don’t drink alcohol or sugary drinks, such as soda, in the heat because they can cause dehydration due to excessive water loss, Glatter said.

The U.S. Centers for Disease Control and Prevention has more on extreme heat. 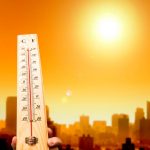