[Update] A representative from the University of Oklahoma Gender + Equality Center has reached out to Lady Clever with the following:

“I figure, since you mentioned the OU Gender+Equality Center in your post, that I’d send a message to clear a few things up. We, at the University of Oklahoma Gender + Equality Center, understand that Adele’s lyrics are not actually promoting harassment and that the phrase in question is nothing but a lyrical hyperbole, in context to the song. What the media has failed to mention, and where I am sure you’re getting your information rather than from us, is that the poster is just a snapshot of Adele’s #1 hit song and is only one of the many songs used in this campaign. The purpose of the campaign is to bring awareness to subtle messages and to start a much needed conversation around harassment, especially on college campuses. It seems very clear, from the media attention it has received, that the campaign has done exactly that. We realize there are multiple interpretations and sides to this conversation, but that’s what makes the conversation so important. The campaign is not targeting Adele or her incredible song “Hello”. I think I speak for the entire office when I say that we are all Adele fans. We don’t actually believe that Adele called someone one thousand times, which would be entirely creepy to see from your phone notifications. Other examples used in the campaign include “Got you shackled in my embrace, I’m latching on to you” – Sam Smith and “Baby, I’m preying on you tonight. Hunt you down, eat you alive…” – Maroon 5. Now, do we actually think Sam Smith has someone shackled in his London flat or that Adam Levine spends his evenings pretending he is on a Safari hunt for women? Absolutely not. We wanted to use popular songs that people are currently hearing on the radio and on their personal devices. Using a medium, such as popular music, is meaningful to college students and gets the conversation started on campus, and apparently across the globe.”

On the poster, they have used the “Hello” lyrics, “I must have called a thousand times” followed by the slogan “Even great songs can normalize sexual harassment.”

A version has also been created with the Maroon 5 lyrics to “Animals”, which reads “Baby, I’m preying on you tonight/ Hunt you down eat you alive.”

Kathy Moxley, Director of the Gender + Equality Center, told FOX411.com: “The music examples were used to demonstrate how aspects of popular media could be interpreted to normalize unhealthy relationship behaviors.”

Dan Gainor, Vice President of Business and Culture at Media Research Center, blasted the campaign, telling the website the posters undermine the “true horrifying nature of stalking and sexual harassment”.

Moxley insists the campaign is not trying to attack the artists or their songs. (HW/WNE/ZN) 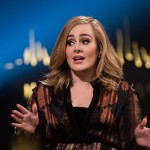