Stars including Catherine Zeta-Jones, Dakota Johnson, and Dame Helen Mirren have all complained about a bias against casting older women within the movie industry, and Malin says the issue is causing stars to go under the knife.

“There’s a lot of ageism in Hollywood — that’s why people are changing their faces and bodies,” she tells the London Evening Standard. “It’s crazy how much it affects people.”

The Watchmen star says the problem is so bad, when directors are looking to cast an elderly character they struggle to find actresses who actually look their age.

She adds: “It’s also fascinating talking to a lot of directors (who say) ‘We can’t find women anymore who look like they’re in their 50s or 60s because they do so much work’. They are few and far between and that’s so sad.”

Malin hopes her new film I’ll See You In My Dreams, in which she stars with Gwyneth Paltrow’s mother Blythe Danner, 73, will prove films featuring older stars can be successful, adding she hopes it will “open people’s eyes (to those) in their twilight years”. (MWN/WNE/ZN) 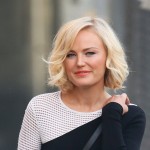