Ask Him: I’m Not a Fan Of My Boyfriend’s Style

Q: I’ve been dating my boyfriend for about two years, and it’s been great. He’s an amazing partner. But I’m sick of the way he dresses! He has a job that requires him to wear a tie, but whenever he’s not working, he dresses like his dad. Baggy, ill-fitting jeans, plain T-shirts that have seen one too many laundry cycles, ratty sneakers — you get the picture I’m painting. The worst part is that he’s not a slob! He goes to the gym regularly and grooms himself well (he has to look “professional” and put-together for his job). It frustrates me because I make an effort to dress well, and we end up looking like the quintessential odd couple when we go out together. What can I do to get him to up his style game? ‘Cause every girl crazy ’bout a sharp dressed man.

A: It sounds like your dude just wants to relax and not care about what he’s wearing when he’s not on the clock. And who can blame him? With as demanding a job as he sounds like he has (I’m guessing he works in finance or law by the hints you drop in your question), I’m sure there’s nothing he looks forward to more during the day than the moment when he gets to come home, shuck his suit, and throw on something more comfortable. If the case was that he liked to lounge around the house in ratty old tees, and only around the house, I’d say to back off and let the man live his life. There are bigger battles to fight in a relationship than the one that centers on what your partner chooses to wear during his or her leisure time. That being said, it sounds like he’s not putting effort into his appearance when he leaves his house except when it’s for work, which is understandable if he doesn’t see the need to do so. There are still a few guys out there — their number is slowly dwindling, it seems, but they still exist — who honestly don’t care about their appearance. (They’re usually the lucky bastards who won the genetic lottery — a burlap sack would look decent on these people.) Have you tried talking to him about it? Of course you haven’t, since you don’t want to come off as a jerk. Telling someone they don’t look good (no matter how naturally handsome or beautiful they are) is a great way to hurt feelings and engender resentment.

I would suggest a more subtle approach. Next time you want to go shopping, drag him to the mall with you, take him to a store with clothing that fits his personality (this is very important — dress HIM, not the mannequin in your head), and then ask him to try something on. Say: “I saw this the other day and thought it might look good on your frame/bring out your eyes/_________. Will you try it on for me, babe?” It sounds like your boyfriend picks clothing that don’t fit him properly — in the case of jeans, for example, pick a pair of slim or straight leg jeans for a more fitted look. 99% of the time, properly-fitting clothes can give the illusion of looking great even if the clothes aren’t all that exciting themselves. Then, when he tries on whatever is you picked out for him, lay it on thick and compliment the hell out of him. But be specific. “Oh my god. The fit of these jeans makes your ass look amazing!” or “Your shoulders look so great in this shirt!” This is called positive reinforcement, and besides being a great tool for training dogs, it works wonders for making certain behaviors permanent. Then don’t leave the store until you’ve paid for those jeans and they’re safely in your hands.

But that only solves one problem, and you can’t guarantee he’ll always come to the mall with you when you ask him to. A lot of people hate the mall, and can’t stand shopping. Plus, replacing an entire wardrobe piece by piece can quickly add up. If your beau is one of those people who run from the mall like a mouse runs from a cat (chances are, he is), you should consider turning him on to a shopping service like Five Four Club.

A monthly subscription service catered for men who want to look stylish but don’t want to deal with the hassle of shopping, Five Four Club curates a monthly selection of clothing based on four different style — Forward, Casual, Classic, and Mix — and delivers it to your doorstep. When a user signs up, they answer a series of questions that helps Five Four Club stylists create the perfect package with clothes that have the perfect fit. They offer everything from hoodies, to sweaters, to button-downs, to jeans and khakis, to T-shirts — they’ll even send your dude socks. And the best part is, the price of the subscription is insanely affordable: for $60/month, you get a package of high-quality clothing valued at over $120. You could easily pay $60 for just a shirt at a random store in the mall. There are no contracts to sign, and you can cancel your subscription whenever you decide to. It’s the perfect solution for a guy who wants to look great but not spend a lot of time thinking about looking great, and it can definitely be the answer to the problem you find yourself having with your dude. Why not gift him his first month’s subscription for the holidays? Five Four Club’s user-friendly cancellation policy means he doesn’t have to continue with the service if he doesn’t dig it, and if he does, well, all the better! That’ll save you both a trip to the mall. Check out Five Four Club’s website for more information, and to see whether Five Four Club might be just what your boyfriend — but let’s be honest, and you, too — need. And if you use the code AFBONUS at checkout, you’ll grab an extra item your first month. Who doesn’t like free sh*t?  I’m sure your boyfriend does. Guys love free sh*t.

At the end of the day, though, you said it yourself: your relationship is great and your boyfriend is an amazing partner. Remember that you love him for who he is and not for who or what he wears. Maybe your dude is just a sweats-loving bro! There’s nothing wrong with that. Good luck and (hopefully) happy shopping. 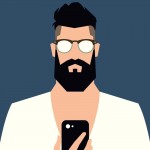 View all posts by Clever Dude