On My Journey to Accepting That I Have Stretch Marks See? Everyone has them.

SO I’M COMING CLEAN, voicing the forbidden, talking that talk: I have stretch marks. To many, this won’t seem like anything worth noting or maybe just a hand up for attention, but becoming a woman comes with all the pros and cons. Being a transgender woman on hormones has given me a brand-new body, and has come with some hidden surprises, to say the least. This is for the people out there that need help coming to terms — or didn’t even know that there were terms involved — with physically becoming a woman.

I had my boobs done, opting for 500CC, which is on the larger scale. To put it in perspective, I went from almost-a-B to a solid-D in cup size. My doctor and nurse urged me that stretch marks were quite rare during the healing process and could be lasered away if necessary. High-profile silicone implants were already an investment, so I wasn’t calculating getting laser work done on my breasts after. About three weeks after the operation I burst out sobbing inside a Nordstrom dressing room. There was a sliver of a line jutting out from the center of my breast and a similar one in a similar spot on the other one. I was speechless. I didn’t ever want to be that girl walking around with nipple pasties, but the idea of showing cleavage that looked like a cracked windshield haunted me. The weeks went on, and every day I traced a new line with my fingers, while older ones deepened in color and pigmentation.

I called my plastic surgeons office religiously, receiving nonchalant answers like “Oh, there’s an oil that helps with that.” An oil? I sounded delirious on the other line. It was like watching one of those commercials where a woman with quadruplets rubs Shea butter on her stomach and, like magic, appears all firm and flawless with no marks. I got the Vitamin E oil, like she suggested … and nothing. By Month Three I had stopped getting new stretch marks, the ones I already did have radiating two to three inches from my areolae. They made me question every low-cut top I fell in love with and every sexy bra I wanted to wear for my boyfriend. It was a stand-still moment for me — not just as a woman but as a human being. In a world where being a transgender woman already has society pointing at you, here I was trying to blend in but finding my insecurities thrust under a brighter light. It was the most painful irony: I had paid someone to make me feel beautiful but, instead, I felt ugly.

In the month that followed, I found stretch marks on my inner thighs. I was warned about the possibility occurring with some weight gain post breast augmentation by my primary care doctor. She told me weight gain fluctuations and weight redistribution are constantly happening when undergoing gender reassignment hormone therapy. At a year-and-a-half mark, I guess I must have hit my stride, because one morning I looked down and saw stripes. “Guess I need to start dressing like a nun,” I joked to my roommate through the tears. I was being dramatic, I know. But in the textbook you read about being a transgender woman, this was definitely a chapter I’d ripped out out of pure fear that it would actually happen to me. I have really pale skin, so when girlfriends told me get a tan to lessen the color or use radiant shimmer lotions to blur them out, all I could do was look back blankly. There was no quick fix for this change. It was something I could not prepare for.

So I lathered up with Bio oil, took Vitamin E supplements, and dieted, but when, despite all that,  I found a few stripes below my bellybutton, I realized I needed to grow the hell up. There is nothing unnatural about stretch marks. According to some message boards and studies, apparently 9/10 women get stretch marks to some degree throughout their lifetime. If you Google “celebrities with stretch marks,” tons of actresses and singers you adore have zoomed-in photos exposing stretch marks, new and old. Model Chrissy Teigen even shared her own post-baby stretch marks on Instagram last year, inspiring other women to do the same in an attempt to normalize and destigmatize them. My family doesn’t care if I have them, and my boyfriend didn’t even notice until I pointed them out to him.

Now I find myself just taking a deep breath and a little bit of powder foundation to cover the edges of the lines. I don’t know if I’ll get anymore, but the ones I do have should fade with time and treatment. A part of me wants to be proud of them at this point. Women get stretch marks — even transgender women get stretch marks — and I’m happy I’m in the same category as most women. I want to call them love lines, tiger stripes, or lightning strikes. No, I don’t welcome them — but I’ll accept them the way I’ve done with the hardest things in my life and my transition. These stretch marks have just taught me that our bodies are temporary. I am still the same soul on the inside… except my outside now comes with a few zebra stripes. 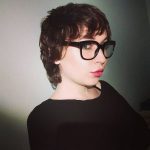 View all posts by Leia Bellinger